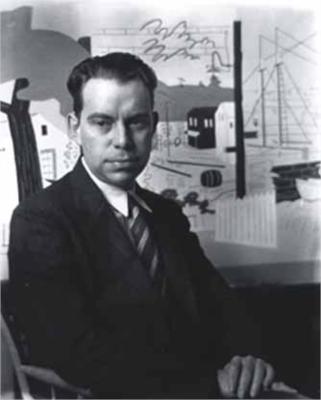 Stuart Davis (December 7, 1892 – June 24, 1964), was an early American modernist painter. He was well known for his jazz-influenced, proto-pop art paintings of the 1940s and 1950s, bold, brash, and colorful, as well as his Ashcan School pictures in the early years of the 20th century. With the belief that his work could influence the sociopolitical environment of America, Davis' political message was apparent in all of his pieces from the most abstract to the clearest. Contrary to most modernist artists, Davis was aware of his political objectives and allegiances and did not waver in loyalty via artwork during the course of his career. By the 1930s, Davis was already a famous American painter, but that did not save him from feeling the negative effects of the Great Depression, which led to his being one of the first artists to apply for the Federal Art Project. Under the project, Davis created some seemingly Marxist works; however, he was too independent to fully support Marxist ideals and philosophies. Despite several works that appear to reflect the class struggle, Davis' roots in American optimism is apparent throughout his lifetime.

Stuart Davis was born on December 7, 1892, in Philadelphia to Edward Wyatt Davis, art editor of The Philadelphia Press, and Helen Stuart Davis, sculptor. Starting in 1909, Davis began his formal art training under Robert Henri, the leader of the Ashcan School, at the Robert Henri School of Art in New York under 1912. During this time, Davis befriended painters John Sloan, Glenn Coleman and Henry Glintenkamp.

In 1913, Davis was one of the youngest painters to exhibit in the Armory Show, where he displayed five watercolor paintings in the Ashcan school style. In the show, Davis was exposed to the works of a number of artists including Vincent van Gogh, Henri Matisse, and Pablo Picasso. Davis became a committed "modern" artist and a major exponent of cubism and modernism in America. He spent summers painting in Gloucester, Massachusetts, and made painting trips to Havana in 1918 and New Mexico in 1923.

After spending several years emulating artists in the Armory Show, Davis started moving toward a signature style with his 1919 Self-Portrait, in the collection of the Amon Carter Museum of American Art. In the 1920s he began his development into his mature style; painting abstract still lifes and landscapes. His use of contemporary subject matter such as cigarette packages and spark plug advertisements suggests a proto-pop art element to his work. Among Davies' practices was the his use of previous paintings. Elements of harbor scenes he painted in Gloucester, Massachusetts can be found in a number of subsequent works. Another practice was painting series, works with similar structures, but with altered colors or added geometric embellishments, essentially creating variations on a theme. Some commentators suggest that this aspect of his work parallels his love of jazz in which a basic chord structure is improvised upon by the musicians.