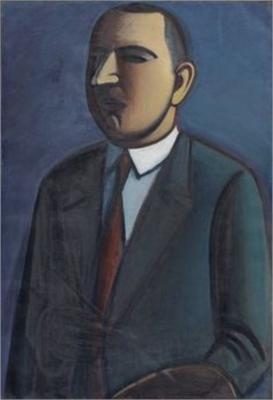 Vilhelm Lundstrøm (1893, Copenhagen – 1950) was one of Denmark's most successful modernist painters. It was he who introduced French cubism to Denmark.

He was educated at the Royal Danish Academy of Art where he studied under Rostrup Böyesen.

Lundstrøm spent an extended period in France in the 1920s where he was influenced by Braque, Picasso and Cézanne.

He is remembered for his geometric still lifes with oranges, his cubistic scenes with nudes and his paintings of bottles, flasks and jugs. His style was characterised by clear, bright lines and few colours.

In his later years, Lundstrøm adapted his style to looser modern art with contrasts in colors and form.