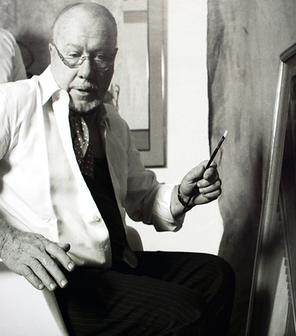 Jeffrey Smart was an expatriate Australian painter acclaimed for his precisionist urban and industrial landscapes. He applied a sharply defined style and hypergeometric compositional logics to the realist depiction of cityscapes. Smart spent most of his artistic life in Italy. There, he developed a peculiar aesthetic that combined a modernist visual vocabulary, originated in the context of 1940s Australian and American Modernism, with references to High Renaissance art and deeply personal meanings. Road signs, oil drums and blank façades of ordinary buildings are the most recurring elements in Smart's puzzling landscapes. With their absolute clarity, linearity and stillness, Smart's works are infused with mystery, mood, and ambiguity, inviting the viewer to contemplate on the symbolic meaning of everyday objects.

Smart was born in Adelaide in 1921. His early fascination with drawing, architecture, and painting led him to enter the Adelaide Teachers College in 1939 and enroll part-time on the South Australian School of Arts and Crafts. In this period, Smart visited the studio of Adelaide-based artist Dorrit Black, who introduced him to the rules of dynamic symmetry, as seen in the work of the Old Masters and developed by avant-garde artists such as Cézanne, Braque, and Léger. The 1940s were a period of artistic growth and raise to fame for Smart, who started to exhibit in group shows alongside other emergent Australian artists, including Jacqueline Hick and Horace Trennery, and was given in his first solo show at Kosminsky Gallery in Melbourne in 1944. Smart described his works from this early period as "snippets of nature" that required no more than three or four hours to complete. Water towers (1944) and Keswick Siding (1945) exemplify Smart's early sketchy style and use of earth tones. In 1945, Smart painted The Waste Land I (1945) and The Waste Land II (1945). These desolate rural views, inspired by T.S. Eliot's poem of the same name, point to the development of the artist’s distinctive hyper-clear and timeless version of landscape painting.

Between 1948 and 1950, Smart travelled to America and Europe, and then moved in Paris in 1949 to study at the Académie Montmartre under Fernand Léger. His several visits to European museum collections in this period will bring Smart to become particularly fascinated with the art of Giovanni Bellini, Giorgione, and especially Piero della Francesca, whose clarity of forms and rigorous use of perspective will influence Smart's works indelibly. Upon his return to Australia in 1951, the artist settled in Sydney, where he will remain for the next twelve years. In the same year he won the Commonwealth Jubilee Prize for his painting Wallaroo (1951). This scene of daily life from the copper-mining Australian town of Wallaroo was praised for its atmospheric effect and balanced composition. During his years in Sydney, Smart also worked as an art teacher and art critic at the Daily Telegraph while continuing to paint landscapes. Works from this period, such as Cooper Park I (1962) and The Cahil Expressway (1962) mark the beginning of Smart's mature style, characterized by an increased hyper-clarity and meticulously crafted compositions.

The 1963 was a crucial year in the artistic and personal life of the artist, who resumed his travels around Europe and permanently moved to Rome with Australian artist and partner Ian Bent. Throughout the 1960s and 1970s, Smart's artistic career gained momentum thanks to prominent solo shows and exhibitions in his homeland and around the world, such as the 1967 solo exhibition at the Redfern Gallery in London and the inclusion in the American touring group show The Australian painters 1964- 1966: Contemporary Australian Painting from the Mertz Collection. Between 1969 and 1970, Smart painted his largest work, City landscapes (1969-1970), a series of panels for the dining-room of the Sydney house of Tony and Sandra McGrath. The commission was designed and overseen by Smart, but Ian Bent executed much of the details. The mural depicts a tall hedge of yellow, withering spikes blocking the view into a bleak cityscape delimited by a leaden, threatening sky.

In 1971, Smart purchased a farmhouse in Posticcia Nuova in the countryside of Arezzo, a small town in Tuscany, where he will remain for the rest of his life. The move to Tuscany marks the beginning of the most prolific period in the artist's career. Starting from the 1970s, Smart dedicated himself to interpreting the landscape of modern Italy, mixing his own personal and imaginary relationship with the land with a crystal-clear recording of precise details of climate, life, and landscape. Paintings from the 1970s and 1980s, such as The Arezzo turn-off II (1973) and The Dome (1977), show repeating architectural motifs, geometric shapes, and highly-controlled patterns of light and shadow as guiding principles in the creation of rigidly structured compositions. While most of Smart's artistic production includes landscapes, in the 1980s and early 1990s the artist also worked on a small number of portraits and self-portraits, in which he staged a stark contrast between accurate likenesses and visionary urban contexts, as seen in Portrait of Germaine Greer (1984), Self-portrait at Papini’s (1984-1985), and Portrait of Clive James (1991-92).

A sketch the artist took during a train journey of the platform at the English station of Ashford transformed into Matisse at Ashford (2004), one of his most relevant works from his later years. Struck by the motif of a series of posters advertising an exhibition of Matisse’s cut-outs, Smart later reworked this fleeting recollection into a rigid grid of horizontal and vertical lines dominated by the rhythmic arrangement of the billboards and a cool palette. The artist died in Arezzo in 2013 at the age of ninety-two. Even though he lived as an expatriate for most of his life, the majority his works is now housed by Australian museums and galleries.

Frank Jeffrey Edson Smart, AO (26 July 1921 – 20 June 2013) was an expatriate Australian painter known for his precisionist depictions of urban landscapes that are "full of private jokes and playful allusions".

Smart was born and educated in Adelaide where he worked as an Art teacher. After departing for Europe in 1948 he studied in Paris at La Grande Chaumière, and later at the Académie Montmartre under Fernand Léger. He returned to Australia 1951, living in Sydney, and began exhibiting frequently in 1957. In 1963, he moved to Italy. After a successful exhibition in London, he bought a rural property called "Posticcia Nuova" near Arezzo in Tuscany. He resided there with his partner until his death.

His autobiography, Not Quite Straight, was published in 1996. A major retrospective of his works travelled around Australian art galleries 1999–2000.

Jeff Smart, as he was generally known for the first thirty years of his life, was born in Adelaide in 1921. He started drawing at an early age. "My parents would give me large sheets of paper, often the backs of posters or calendars ... anything". He was educated at Pulteney Grammar School and Unley High School, and originally wanted to become an architect. However, after studying at the Adelaide Teachers College and the South Australian School of Art and Crafts in 1937–1941, he taught art in schools for the South Australian Education Department in 1942–1947. In the early 1940s he accompanied local maritime artist, John Giles, in painting industrial landscapes at Port Adelaide. He joined the Royal South Australian Society of Arts around 1941 and was elected vice-president in 1950. It was during this period that he acknowledged his homosexuality.

Smart travelled to Europe in 1948, studying in Paris at La Grand Chaumière and later the Académie Montmartre under Fernand Léger. "As my technique grew, I found I could paint those things I liked looking at, those slum streets behind the city apartments". In 1950 he lived on the island of Ischia in the bay of Naples, where he painted with Donald Friend, Michael Shannon and Jacqueline Hick.

In 1951, he moved to Sydney and spent the next 2 years there as an art critic for the Daily Telegraph (1952–54), an arts compere called Phidias for the ABC children's radio programme The Argonauts, and a drawing teacher at the National Art School (1956–62). From 1956 to 1962, he also presented on ABC-TV's Children's Hour. Smart was also employed by The King's School, Parramatta in 1954–56 as an Art teacher, following Jean Bellette (known as Mrs Haefliger) and John Passmore. He exhibited throughout this period at the Macquarie Galleries.

Smart departed Australia for London on the Castel Felice out of Sydney just after Christmas 1963, driving to Greece with fellow painter Justin O'Brien. In 1965 he returned to Italy, and lived there for the rest of his life, regarding himself as an "Australian living abroad" and carrying an Australian passport. His last work, "Labyrinth", was completed in 2011, at which point he announced his retirement.