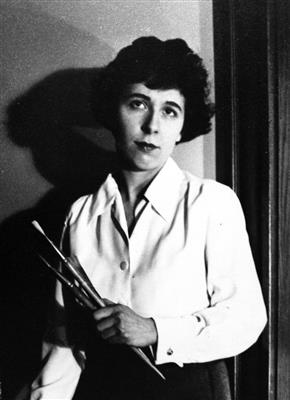 Martyl Suzanne Schweig Langsdorf (March 16, 1917 – March 26, 2013) was an American artist who created the Doomsday Clock image for the June 1947 cover of the Bulletin of the Atomic Scientists.


She was born in St. Louis, Missouri. Her mother was a painter and her father a portrait photographer. She earned a degree from Washington University in St. Louis.


Her husband, physicist Alexander Langsdorf, Jr., worked on the Manhattan Project and helped found the Bulletin of the Atomic Scientists. The Doomsday Clock illustration was the only magazine cover she ever created. Both before and after that project, she painted abstract landscapes and murals. Her mural work includes an oil on canvas mural titled Wheat Workers for the Russell, Kansas post office, commissioned by the Treasury Section of Fine Arts, and completed in 1940.


She died of complications of a lung infection in Schaumburg, Illinois.