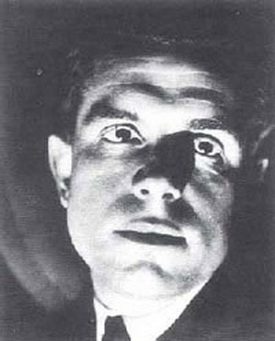 Enrico Prampolini (20 April 1894, Modena – 17 June 1956, Rome) was an Italian Futurist painter, sculptor and scenographer. He assisted in the design of the Exhibition of the Fascist Revolution and was (like Gerardo Dottori) active in Aeropainting.

He pursued a programme of abstract and quasi-abstract painting, combined with a career in stage design. His Spatial-Landscape Construction (1919) is quasi-abstract with large flat areas in bold colours, predominantly red, orange, blue and dark green. His Simultaneous Landscape (1922) is totally abstract, with flat colours and no attempt to create perspective. In his Umbrian Landscape (1929), produced in the year of the Aeropainting Manifesto, Prampolini returns to figuration, representing the hills of Umbria. But by 1931 he had adopted "cosmic idealism", a biomorphic abstractionism quite different from the works of the previous decade, for example in Pilot of the Infinite (1931) and Biological Apparition (1940).

Prampolini was an influence on Tullio Crali.

After studying with Dullio Cambellotti at the Academy of Fine Arts in Rome, he became a leading member of the Futurist Movement as a painter, scenographer and architect. He had close contacts with the representatives of the European avant-garde art, with the Section d'Or, Dadaism, the Bauhaus, De Stijl, the Abstraction-Création group, with Pablo Picasso, Piet Mondrian, Wassily Kandinsky and Jean Cocteau.

From 1913 for a period collaborates with the monthly magazine Varietas (it) in Milan.

In 1917, with Bino Sanminiatelli he founded the magazine Noi. The same year, he realised the sets for the futurist film Thaïs, directed by Anton Giulio Bragaglia. He created the interior of a dream and suffocating villa, whose walls are decorated with spirals, lozenges, chessboards and symbolic figures. This film had a significant influence on the anti-naturalistic scenes of German Expressionism.

Prampolini occupies a place of its own in the European abstract art, characterized by its deep concern for the dynamism and Organicism , which manifests itself in the cosmic visions and dreams of the 1930s and 1940s. In 1927 he founded the "Futurist Theatre Prampolini". In 1928 he conceived the Futurist Pavilion at the "Esposizione del Valentino" in Turin , which will be realised by Fillìa and Pino Curtone.

Together with Fillia, he realized in 1933 a large mosaic Le comunicazioni for the tower of the Palazzo delle Poste in La Spezia.

After the futurist experience, he produced different materials and works, sometimes influenced by the visions of the microcosm.

He declared that his aim to express the extreme latitudes of the introspective world.