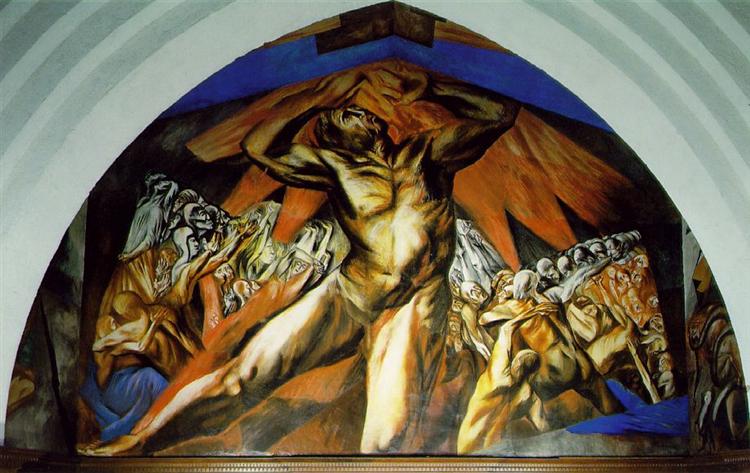 In June 1930, Orozco completed his first major mural in the United States, Prometheus (1930) at Pomona College in California. Orozco was commissioned to paint the mural in Frary Hall at the encouragement of José Pijoán, professor of Hispanic civilization and art history. Orozco stayed at the campus dormitory in Pomona College and painted the mural over two months.

The subject of the mural is the Greek myth about the Titan Prometheus, who stole the fire from Mount Olympus and gave it to humanity. The central mural depicts Prometheus reaching for fire, preparing to bring it to earth. The ceiling panel depicts stylized flames emerging from a composition of geometric forms – these are generally understood as a symbolic representation of God, the source of the fire of knowledge. Many have suggested that Orozco identified with the myth of Prometheus and have drawn parallels between the mural and his personal history. This was a frustrating time in Orozco’s career, he felt artistically isolated and underappreciated, often received by indifferent or hostile audiences. The fire was also a significant element in his personal history: when he was 21, he lost his left hand while making fireworks to celebrate Mexico’s Independence Day. In the mural, Prometheus’s right hand appears consumed by the flame, possibly signifying the artist’s loss.

The two side panels were designed by the artists but were painted in part by his assistant Jorge Juan Crespo de la Serna. The panel on the west wall, Destruction of Mythology shows the Greek gods Zeus, Hera and Io, whose gaze is frightened and concentrated on Prometheus. The panel on the east wall, Strangulation of Mythology depicts male and female centaurs, the female centaur is caught in the coils of a giant serpent, while her infant throws his arms towards her. According to Orozco, the side panels represent “the ancient times that Prometheus is upsetting by giving the fire of knowledge to man”.

Prometheus holds a significant place in Orozco’s artistic development, and more broadly in the history of mural painting. Orozco joined the Muralism in 1923, and several of his early murals anticipate the motifs in Prometheus. Even in his early experiments with fresco, Orozco painted giant muscular figures against a background of sun-like symbols. An example of this is the mural Omniciencia (1925) that deals with the theme of creation – in the central composition, a muscular female figure is kneeling clasping her hands upwards to receive the gift of fire. Like in Prometheus, the kneeling pose is positioned on the central axis in the composition. Additionally, there are similarities in the radiating motifs behind the central figures in the two murals.

The Muralism movement was led by Los Tres Grandes, the three great Mexican muralists: Orozco, Diego Rivera and David Alfaro Siqueiros. Prometheus was the first major mural painted in the United States by one of these three artists. The mural received acclaim almost immediately after its completion, it was praised by critics and the architect of Fray Hall, Sumner Spaulding. Later, abstract expressionist painter Jackson Pollock stated it was “the greatest painting in North America”.