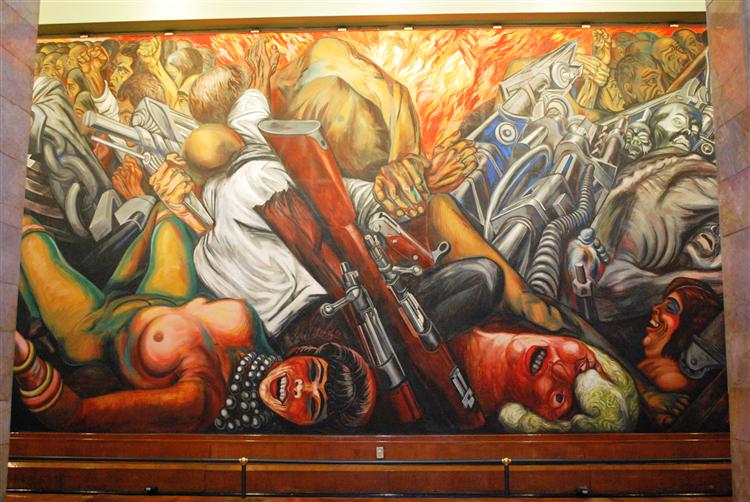 The mural Catharsis (1934) decorates the walls of the Palace of Fine Art in Mexico City. Orozco presents there a dystopian vision of humanity, plagued by conflict, decay, and destruction. In particular, he highlights a world ravaged by industrialization and war: the backdrop is a chaotic scene of agitated protesters, men engaging in combat among piles of cogwheels, weapons, and machinery. The most prominent figure is the laughing prostituted woman, provocatively lying on her back left of the center of the mural. Orozco also incorporates disembodied heads of other prostituted women in the foreground, their grimacing faces are painted with garish makeup.

The incorporation of prostituted women in a public commission for a prominent cultural institution reflects the multiple layers of Orozco’s social and political critique in Catharsis. In the context of European literary and artistic avant-garde, the figure of the prostituted woman is a motif that represents the female body as both an object of male desire and a commodity. The motif embodied the temporal nature and commodified social relations that characterized the experience of modernity and industrialization. This interpretation is supported by some of Orozco’s preparatory sketches, in which the prostitute’s head resembles a bag of coins suggesting that the figure represents the ultimate commodity fetish.

Catharsis was the first public fresco the artist created after his seven yearlong stay in the United States, and it presented Orozco’s artistic development during his time abroad. The mural reflects the artist’s time in New York: he was influenced by the city’s architecture, for instance, the collapsed steel girder resembles a Manhattan skyscraper. Some have suggested that cinema was another inspiration for Catharsis, specifically the German expressionist film Metropolis (1927) directed by Fritz Lang – a film Orozco saw while he was living in New York. Catharsis shares aesthetic and thematic similarities with Lang’s film: Metropolis also presents dystopian modernity that reveals anxieties relating to technology and mass uprisings. While Lang’s film reconciles the conflicts of capital and labor, Catharsis does not offer a potential solution. Instead, Orozco demonstrates his skeptical attitude toward technological developments and mass mobilization.

It is possible that the figure of the prostituted woman was inspired by the robot Maria in Metropolis. In the film, the robotic Maria uses her sexuality to inspire an uprising and is later burned at the stake by the same masses. Therefore, Maria is also a signifier of the rioting mob. Accordingly, the prostituted woman in Catharsis can also be interpreted as a symbol of Mexico’s ten-year revolution – events that the artist experienced and chronicled firsthand. Orozco was deeply critical of the new political regime in post-revolutionary Mexico; thus, the figure of the prostituted woman can be understood as a defiled symbol of corruption. This was a common trope, political satirists in opposition papers often used the administration’s social and economic links to 'high-class prostitutes' to expose their misconduct and corruption. For Orozco, the mural was an opportunity to condemn the hypocrisy and of the ruling regime in a public space in front of a national audience.