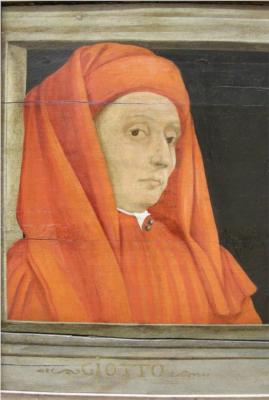 Considered one of the first of the Italian Renaissance artists, Giotto di Bondone was a talented painter and architect. Not only are his works celebrated today for their architectural style and subject matter, but he was also renowned by his contemporaries, including the Italian poets Boccaccio and Sacchetti, and Dante Alighieri, who mentioned the artist by name in his famous book The Divine Comedy. Michelango is also said to have studied his frescoes in the Peruzzi Chapel.

Giotto is most remembered for his break with the traditional Byzantine style, and by introducing the technique of drawing accurately from life. He went away with the typical Byzantine style of elongated faces and stylized clothing, and instead incorporated three-dimensional forms, based on real observation, and garments hanging naturally with real weight. All of his breaks from tradition earned him the reputation of creating a new standard of representational painting. He actively invited the viewer into the scene by creating real human faces and real emotion.

Although he is a highly renowned Italian Renaissance painter, his life is surrounded in mystery. His date of birth, place of birth, appearance, the order in which he created his works, and his burial location are all clouded in controversy. Many of the works ascribed to him may not actually be his, a fact which keeps art historians guessing at many frescoes in Italy during the period in which he was alive. Two of his works, which are known for sure to be his, are the Campanille bell tower of the Florence Cathedral and the frescoes in the Arena Chapel in Padua. The latter frescoes are considered to be one of the supreme masterpieces of the Early Renaissance period, as they incorporate both Giotto’s style as well as his interpretation of sacred bible stories.

Giotto di Bondone (c. 1267 – January 8, 1337), known mononymously as Giotto (Italian: [ˈdʒɔtto]) and Latinised as Giottus, was an Italian painter and architect from Florence during the Late Middle Ages. He worked during the "Gothic or Proto-Renaissance" period.

Giotto's contemporary, the banker and chronicler Giovanni Villani, wrote that Giotto was "the most sovereign master of painting in his time, who drew all his figures and their postures according to nature" and of his publicly recognized "talent and excellence".

In his Lives of the Most Excellent Painters, Sculptors, and Architects, Giorgio Vasari described Giotto as making a decisive break with the prevalent Byzantine style and as initiating "the great art of painting as we know it today, introducing the technique of drawing accurately from life, which had been neglected for more than two hundred years".

Giotto's masterwork is the decoration of the Scrovegni Chapel, in Padua, also known as the Arena Chapel, which was completed around 1305. The fresco cycle depicts the Life of the Virgin and the Life of Christ. It is regarded as one of the supreme masterpieces of the Early Renaissance.

That Giotto painted the Arena Chapel and that he was chosen by the Commune of Florence in 1334 to design the new campanile (bell tower) of the Florence Cathedral are among the few certainties about his life. Almost every other aspect of it is subject to controversy: his birth date, his birthplace, his appearance, his apprenticeship, the order in which he created his works, whether or not he painted the famous frescoes in the Upper Basilica of Saint Francis in Assisi and his burial place.

Tradition holds that Giotto was born in a farmhouse, perhaps at Colle di Romagnano or Romignano. Since 1850, a tower house in nearby Colle Vespignano has borne a plaque claiming the honor of his birthplace, an assertion that is commercially publicized. However, recent research has presented documentary evidence that he was born in Florence, the son of a blacksmith. His father's name was Bondone. Most authors accept that Giotto was his real name, but it is likely to have been an abbreviation of Ambrogio (Ambrogiotto) or Angelo (Angelotto).

The year of his birth is calculated from the fact that Antonio Pucci, the town crier of Florence, wrote a poem in Giotto's honour in which it is stated that he was 70 at the time of his death. However, the word "seventy" fits into the rhyme of the poem better than any longer and more complex age so it is possible that Pucci used artistic license.

Vasari states that Giotto was a shepherd boy, a merry and intelligent child who was loved by all who knew him. The great Florentine painter Cimabue discovered Giotto drawing pictures of his sheep on a rock. They were so lifelike that Cimabue approached Giotto and asked if he could take him on as an apprentice. Cimabue was one of the two most highly renowned painters of Tuscany, the other being Duccio, who worked mainly in Siena.

Vasari recounts a number of such stories about Giotto's skill as a young artist. He tells of one occasion when Cimabue was absent from the workshop, and Giotto painted a remarkably-lifelike fly on a face in a painting of Cimabue. When Cimabue returned, he tried several times to brush the fly off.