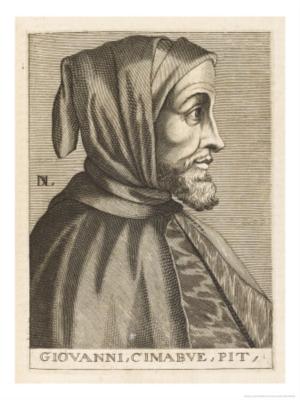 Although heavily influenced by Byzantine models, Cimabue is generally regarded as one of the first great Italian painters to break from the Italo-Byzantine style. While medieval art then was scenes and forms that appeared relatively flat and highly stylized, Cimabue's figures were depicted with more-advanced lifelike proportions and shading than other artists of his time. According to Italian painter and historian Giorgio Vasari, Cimabue was the teacher of Giotto, the first great artist of the Italian Proto-Renaissance. However, many scholars today tend to discount Vasari's claim by citing earlier sources that suggest otherwise.

Little is known about Cimabue's early life. One source that recounts his career is Vasari's Lives of the Most Excellent Painters, Sculptors, and Architects, but its accuracy is uncertain.

He was born in Florence and died in Pisa. Hayden Maginnis speculates he could have trained in Florence under masters who were culturally connected to Byzantine art. Many scholars now discount Vasari's claim that he later had Giotto as his pupil; they cite earlier sources that suggest otherwise.

Italian art historian Pietro Toesca attributed the Crucifixion in the church of San Domenico in Arezzo to Cimabue, dating around 1270, making it the earliest known attributed work that departs from the Byzantine style. Cimabue's Christ is bent, and the clothes have the golden striations that were introduced by Coppo di Marcovaldo.

Around 1272, Cimabue is documented as being present in Rome, and a little later he made another Crucifix for the Florentine church of Santa Croce. Now restored, having been damaged by the 1966 Arno River flood, the work was larger and more advanced than the one in Arezzo, with traces of naturalism perhaps inspired by the works of Nicola Pisano. In the same period (c. 1280), Cimabue painted the Maestà, originally displayed in the church of San Francesco at Pisa, but now at the Louvre. This work established a style that was followed subsequently by numerous artists, including Duccio di Buoninsegna in his Rucellai Madonna (in the past, wrongly attributed to Cimabue) as well as Giotto. Other works from the period, which were said to have heavily influenced Giotto, include a Flagellation (Frick Collection), mosaics for the Baptistery of Florence (now largely restored), the Maestà at the Santa Maria dei Servi in Bologna and the Madonna in the Pinacoteca of Castelfiorentino. A workshop painting, perhaps assignable to a slightly later period, is the Maestà with Saints Francis and Dominic currently housed in the Uffizi.

During the pontificate of Pope Nicholas IV, the first Franciscan pope, Cimabue worked in Assisi. At Assisi, in the transept of the Lower Basilica of San Francesco, he created a fresco named Madonna with Child Enthroned, Four Angels and St Francis. The left portion of this fresco is lost, but it may have shown St Anthony of Padua (the authorship of the painting has been recently disputed for technical and stylistic reasons). Cimabue was subsequently commissioned to decorate the apse and the transept of the Upper Basilica of Assisi, in the same period of time that Roman artists were decorating the nave. The cycle he created there comprises scenes from the Gospels, the lives of the Virgin Mary, St Peter and St Paul. The paintings are now in poor condition because of oxidation of the brighter colours that were used by the artist.