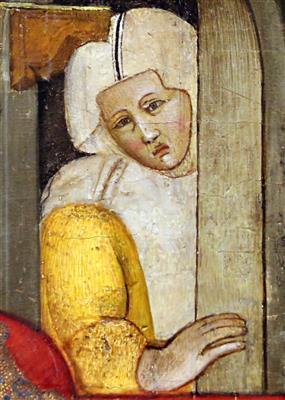 Cennino d'Andrea Cennini (c. 1360 – before 1427) was an Italian painter influenced by Giotto. He was a student of Agnolo Gaddi in Florence. Gaddi trained under his father, called Taddeo Gaddi, who trained with Giotto.

Cennini was born in Colle di Val d'Elsa, Tuscany. After training as an artist with Agnolo Gaddi in Florence he worked at the court of Francesco Novello da Carrara in Padua for some years before apparently returning to Colle di Val d'Elsa.

He is remembered mainly for having authored Il libro dell'arte. Thought to have been written around the turn of the 15th century, the book is a "how to" on late Medieval and early Renaissance painting. It contains information on pigments, brushes, drawing, panel painting, the art of fresco, painting on fabrics and casting, amongst other techniques and tricks. Cennini also mentions oil painting in passing, which was important for dispelling the myth, propagated by Giorgio Vasari and Karel Van Mander, that oil painting was invented by Jan van Eyck (although Theophilus (Roger of Helmerhausen) clearly gives instructions for oil-based painting in his treatise, On Divers Arts, written in 1125).

The dates of Cennini's life are highly speculative. It is often falsely assumed that he was alive in 1437 because that date appears on the earliest of the four extant copies of his manuscript. However, an administrative document from Colle di Val d'Elsa dated 1427 probably refers to his son; if this is the case then the document makes it clear that Cennini was dead by this time. The techniques Cennini describes range from ones which were already in use in the 13th century to ones which were innovative in the late fourteenth century. However, there is no evidence in his writing of the exciting developments in oil painting taking place in the early 15th century, suggesting that his book was written not long after the turn of the century.

The extent to which Cennini intended to provide a practical handbook for the apprentice painter is disputed. Some scholars believe that his book was a presentation book or a guild book instead. Along with technical methods, Cennini offered advice on the sort of lifestyle to which a young painter should subscribe. "Your life should be arranged just as if you were studying theology, or philosophy, or other theories, that is to say, eating and drinking moderately, at least twice a day, electing digestible and wholesome dishes, and light wines; saving and sparing your hand, preserving it from such strains as heaving stones, crowbars, and many other things which are bad for your hand, from giving them a chance to weary it. There is another cause which, if you indulge it, can make your hand so unsteady that it will waver more, and flutter far more, than leaves do in the wind, and this is indulging too much in the company of women."

According to Victoria Finlay, in her book Colour: Travels Through The Paintbox, the infamous UK forger, Eric Hebborn was greatly influenced by Cennino Cennini. The last book Hebborn wrote before he was brutally murdered was The Art Forger's Handbook. Finlay writes that he "used and adapted Cennino's advice extensively - preparing panels, tinting papers different colours, and making brand new works look as if they had been varnished some time before (by beating egg-white, left overnight and then applying it with a brush), just as the master advised."