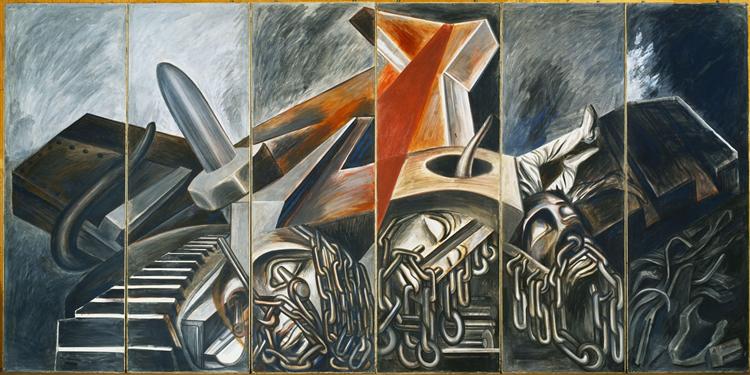 In 1940, the Museum of Modern Art (MoMA) in New York commissioned Orozco to paint the mural Dive Bomber and Tank (1940) for the important exhibition Twenty Centuries of Mexican Art. This indicated the growing interest and emphasis placed on mural painting in the context of Mexican art. The mural was painted in the hall of the Museum over a short period of ten days. Orozco painted most of the mural in front of the public, making it a performance of sorts.

Dive Bomber and Tank represents the wreckage and destruction of modern warfare: from the top center of the painting, there is a tail of a fallen plane, an element that stands out because of its red color. Large structures resembling wings emerge from the central wreckage, while tank tracks appear on the lower left. In the large pile of machinery, viewers can identify human remains like the legs pointing out on the right side of the mural, and the three large masklike faces pierced by spikes and tangled in chains on the lower half of the mural. The painting serves as a universal message against violence. Some have suggested that Orozco emulated the model set by Pablo Picasso’s Guernica (1937), which at the time was exhibited at the MoMA as part of its American tour. Picasso’s monumental painting became a representative example of the aesthetic of a modernist painting that addressed social and political themes in the late 1930s. Painted in 1940, during World War II, Orozco’s imagery refers to the current events of the time. The artist however insisted that the mural was not a political statement and said: “I simply paint the life that is going on at the present—what we are and what the world is at this moment. That is what modern art is.”

The mural is made up of six portable fresco panels that are meant to be interchangeable. At first, Orozco struggled with the idea of a portable fresco, complaining that frescos are too delicate to be moved. The decision to divide the mural into six panels was based on practical reasons, the museum wanted the exhibition to travel, and portable panels were a suitable solution. In the August 1940 issue of the MoMA Bulletin, Orozco suggested six distinct arrangements for the presentation of the mural. Some of these configurations create more abstract compositions, which result in a more ambiguous image than the standard arrangement. The different arrangements of the mural create multiple meanings, which the artist explained in the Bulletin: “The order of inter-relationships may stay the same in any other order, and unexpected and expected possibilities may appear. Suppose we change the actual order of the plastic vaults in the Sistine Chapel…” The art historian, James Oles explains that the stylistic and physical fragmentation in the fresco serves as an allegory for the fragmentation of war. Accordingly, Orozco’s apocalyptic image can be understood as a general condemnation of violence caused by war.