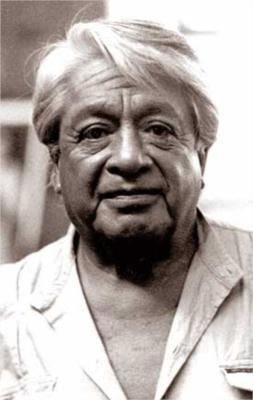 Oswaldo Guayasamín (July 6, 1919 – March 10, 1999) was an Ecuadorian master painter and sculptor of Quechua and Mestizo heritage.

Guayasamín was born in Quito,Ecuador, to a native father and a Mestiza mother, both of Kichwa descent. His family was poor and his father worked as a carpenter for most of his life. Oswaldo Guayasamín later worked as a taxi and truck driver. He was the first child of ten children in his family. When he was young, he enjoyed drawing caricatures of his teachers and the children that he played with. He showed an early love for art. He created a Pan-American art of human and social inequalities which achieved international recognition.

He graduated from the School of Fine Arts in Quito as a painter and sculptor. He also studied architecture there. He held his first exhibition when he was 23, in 1942. While he was attending college, his best friend died during a demonstration in Quito. This incident would later inspire one of his paintings, "Los Niños Muertos" (The Dead Children). This event also helped him to form his vision about the people and the society that he lived in.

Guayasamín started painting from the time he was six years old. Starting from water colors and transforming all the way through to his signature humanity pieces, his art career had many highlights. Although tragedy molded Guayasamín's work, it was his friend's death that inspired him to paint powerful symbols of truth in society and injustices around him. While his interest was seldom with his school work, he began selling his art before the time that he could even read. (VANDY) After his attendance at the School of Fine Arts in Quito, his career took off.

La Galería Caspicara, an art gallery opened by Eduardo Kingman in 1940 was one of the first places that Guayasamín was featured. His themes of oppression in the lower social classes allowed him to stand out and gain more recognition. "El Silencio" in particular, was a painting from this showcase that stood out. It marks a shift in Guayasamín's work from story telling to focusing on his subjects symbolizing all human suffering. (http://scholar.library.miami.edu/1492books/OswaldoGuayasamin.pdf)

Guayasamín met Jose Clemente Orozco while traveling in the United States of America and Mexico from 1942 to 1943. They traveled together to many of the diverse countries in South America. They visited Peru, Brazil, Chile, Argentina, Uruguay and other countries. Through these travels, he observed more of the indigenous lifestyle and poverty that appeared in his paintings.

In 1988 the Congress of Ecuador asked Guayasamín to paint a mural depicting the history of Ecuador. Due to its controversial nature, the United States Government criticized him because one of the figures in the painting shows a man in a Nazi helmet with the lettering "CIA" on it.