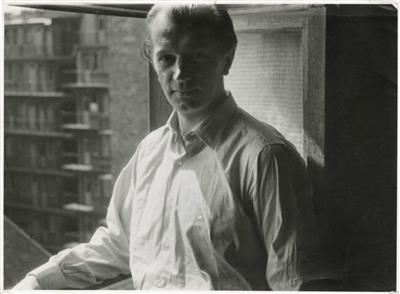 Vytautas Kasiulis’s (1918–1995) born in the family of artist-decorator Matas Kasiulis in Simnas showed an exceptional talent for drawing since his childhood. In 1937 he entered Kaunas School of Arts (which was then called Kaunas Institute of Applied Arts), graduating in 1941.After completing his studies, Kasiulis stayed in the institute as a member of staff. Kasiulis’ great potential for future artistic success was spotted while he was still in Kaunas: Following his first solo exhibition in the Vytautas the Great Museum of Culture in 1943, culture critic Juozas Keliuotis, writing for the Kūryba magazine, was predicting him an outstanding artistic future, and the placement in the Academy of Fine Arts Vienna he had secured was already paving the way to success.
The fate of the artist who had left for Austria and Germany in 1944 to refine his skills was determined by the end of WWII, which made it impossible for him to return to Lithuania. Along with other artists that fled Lithuania, Kasiulis taught in the Freiburg School of Arts and Crafts founded in 1946. There he painted prodigiously, participating in exhibitions of Lithuanian artists and organising several solo exhibitions in Kiel, Bad Segeberg, Hamburg, and Freiburg.
A new and challenging period in the artist’s life began in Paris, where he arrived in 1948. Despite the life of a homeless street wanderer he has experienced in the post-war Paris and miserable lot of a night watchman in a shop, he never lost hope, creating prodigiously, visiting exhibitions, and relentlessly pursuing his goal. Recognition and fame were not long in the coming. Kasiulis’s painting ‘Flight into Egypt’ was included in the list of the best works in the contest organised in Paris by Hallmark, an American gallery, and, along with works by other forty-nine painters, travelled around America’s and Argentina’s most prestigious galleries. Encouraged by his first success, Kasiulis went on to do a solo exhibition in Paris in 1949, which drew the attention of both art critics and gallery owners. Later that same year, Raymond Duncan presented Kasiulis’s works in his own gallery, which brought great fame to the artist. Kasiulis’s works attracted the interest of Marlborough gallery in London, with which he later concluded a long-term agreement. In 1950, famous Parisian art expert Christian-Gilbert Stiébel hosted a large-scale exhibition of works by Kasiulis, which was not only acclaimed by critics but also noticed by museums. In 1955, his works featured in an exhibition of one hundred most famous Parisian artists hosted by the Galliéra Museum. Exhibitions in the most prestigious galleries and museums in Paris soon brought him international acclaim: be it New York, Berlin, Stockholm, Copenhagen, or Geneva, success never left him.
Kasiulis bought a gallery for himself in central Paris, where he exhibited his paintings and graphic works. In Lithuania, however, Kasiulis was hardly ever mentioned simply because his works had been inaccessible for the general public for quite a while. Lithuanian Art Museum

Vytautas Kasiulis (Simnas, Alytus County, 23 April 1918 – Paris, 12 March 1995) was a Lithuanian painter of the School of Paris, one of the most famous Lithuanian artists who became exiles in Paris after the annexation of their country by the Soviet Union.

In Kaunas, Kasiulis participated beginning in 1942 in several group expositions and had a solo exhibition at the Vytautas Magnus Museum of Culture in 1943. He left the following year for Germany, where he taught at the Fine Arts School in Fribourg-en-Brisgau, and had several solo expositions in Kiel, Bad Siegelberg, Hamburg and Fribourg.

After he arrived in Paris in 1948, his first exposition was held at Raymond Duncan's gallery in 1949. Starting in 1954, he also showed his work outside France, notably in Berlin, Copenhagen, Geneva, Stockholm, Cleveland, New York, and Toronto. He also participated in several salons, including the Salon des indépendants.

He is buried in the Pantin cemetery in Paris.