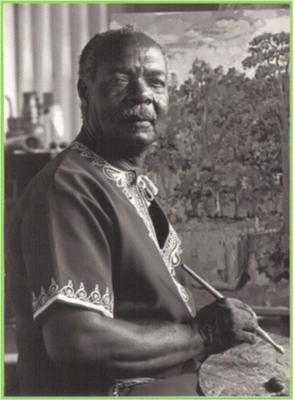 Born in Falmouth, Trelawny Parish, Jamaica, Huie moved to Kingston when he was 16 years old; in the 1930s he became part of the "Institute Group" at the Institute of Jamaica, where he received his first formal training with Koren der Harootian. He also studied under Jamaican artist and painter, Dorothy Henriques-Wells, early in his career.

In the early 1940s he worked as an assistant to Edna Manley while she taught at Kingston's Junior Centre. Further study followed, in London at the Camberwell School of Arts and Crafts and in Canada at the Ontario College of Art, before his return to Jamaica. In 1950 he was one of the founding tutors of the Jamaica School of Art and Crafts. He exhibited around the United States and Jamaica, and later in his career settled in the US. On National Heroes Day in 2009 he was honored by the Jamaican Embassy for his contributions to the Jamaican community in and around Washington, D.C.

As a painter, Huie was best known for his landscape and genre work, though he often painted portraits as well. Some of his pieces expressed sociopolitical and nationalist themes, and many of his early paintings related in some way to manual labor. His later paintings showed the influence of post-Impressionism, along with elements of art deco and Mexican mural painting. He usually used oils, but sometimes used acrylics. His paintings hang in the National Gallery of Jamaica, among other collections.

In 1974 he was awarded the Musgrave Gold Medal for his work by the Institute of Jamaica. He died on 31 January 2010 in Baltimore, Maryland, aged 89.