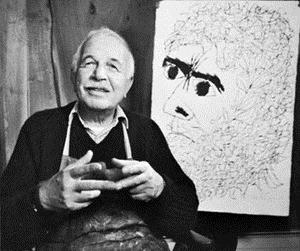 Ben Shahn (September 12, 1898 – March 14, 1969) was a Lithuanian-born American artist. He is best known for his works of social realism, his left-wing political views, and his series of lectures published as The Shape of Content.

Shahn was born in Kaunas, Lithuania, then part of the Russian Empire, to Jewish parents Joshua Hessel and Gittel (Lieberman) Shahn. His father was exiled to Siberia for possible revolutionary activities in 1902, at which point Shahn, his mother, and two younger siblings moved to Vilkomir (Ukmergė). In 1906, the family immigrated to the United States where they rejoined Hessel, who had fled Siberia. They settled in the Williamsburg section of Brooklyn, New York, where two more siblings were born. His younger brother drowned at age 17. Shahn began his path to becoming an artist in New York, where he was first trained as a lithographer. Shahn's early experiences with lithography and graphic design is apparent in his later prints and paintings which often include the combination of text and image. Shahn's primary medium was egg tempera, popular among social realists.

Although Shahn attended New York University as a biology student in 1919, he went on to pursue art at City College in 1921 and then at the National Academy of Design. After his marriage to Tillie Goldstein in 1924, the two traveled through North Africa and then to Europe, where he made "the traditional artist pilgrimage." There he studied great European artists such as Henri Matisse, Raoul Dufy, Georges Rouault, Pablo Picasso and Paul Klee. Contemporaries who would make a profound impact on Shahn's work and career include artists Walker Evans, Diego Rivera and Jean Charlot.

Shahn was dissatisfied with the work inspired by his travels, claiming that the pieces were unoriginal. Shahn eventually outgrew his pursuit of European modern art, and redirected his efforts toward a realist style which he used to contribute to social dialogue.

The twenty-three gouache paintings of the trials of Sacco and Vanzetti communicated the political concerns of his time, rejecting academic prescriptions for subject matter. The Passion of Sacco and Vanzetti was exhibited in 1932 and received acclaim from both the public and critics. This series gave Shahn the confidence to cultivate his personal style, regardless of society’s art standards.

Shahn's subsequent series of California labor leader Tom Mooney won him the recognition of Diego Rivera. In May and June 1933, he served as an assistant to Diego Rivera while Rivera executed the Rockefeller Center mural. Shahn had a role in fanning the controversy, by circulating a petition among the workers. Also during this period, Shahn met photojournalist Bernarda Bryson, who would later become his second wife. Although this marriage was successful, the mural, his 1934 project for the Public Works of Art Projects and proposal for the Municipal Art Commission were all failures. Fortunately, in 1935, Shahn was recommended by Walker Evans, a friend and former roommate, to Roy Stryker to join the photographic group at the Farm Security Administration (FSA). As a member of the FSA group, Shahn roamed and documented the American south together with his colleagues Walker Evans and Dorothea Lange. Like his earlier photography of New York City, Shahn’s FSA work can be viewed as social-documentary. Similarly, Shahn’s New Deal art for the FSA and Resettlement Agency exposed American living and working conditions. He also worked for these agencies as a graphic artist and painter. Shahn’s fresco mural for the school of Jersey Homesteads is among his most famous works, but the government also hired Shahn to execute the Bronx Central Annex Post Office and Social Security murals. In 1939, Shahn and his wife produced a set of 13 murals inspired by Walt Whitman's poem I See America Working and installed at the United States Post Office-Bronx Central Annex. Curator Susan Edwards recognizes the influence of this art on the public consciousness, writing, "The Roosevelt administration believed [such] images were useful for persuading not only voters but members of Congress to support federal relief and recovery programs … The art he made for the federal government affirms both his own legacy and that of the New Deal."