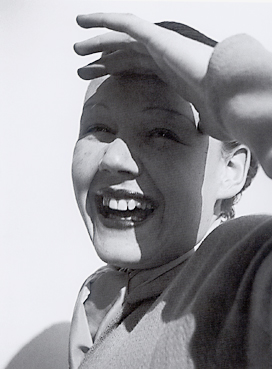 Verena Loewensberg was the oldest daughter of a family of doctors in Zurich. After two years at the Kunstgewerbeschule in Basel (1927-1929), she became a textile weaver in Speicher, Switzerland. In 1931 she married the designer Hans Coray. The couple had two children: Stephan in 1943 and Henriette in 1946. She subsequently separated from her husband.

Loewensberg had a lifelong friendship with the painter Max Bill and his wife Binia.

In 1936 she painted the first concrete pictures and helped in 1937 with the founding of an association of modern artists in Zurich. In the center were the Zürcher Konkreten. Loewensberg associated with Max Bill, Camille Graeser and Richard Paul Lohse. She participated in their successful group exhibitions. In addition, she was inspired by the work of Georges Vantongerloo and Piet Mondrian. In the 1950s and 1960s she worked for Guhl and Geigy. She also taught.


Content in is translated from the existing German Wikipedia article at de:Verena Loewensberg