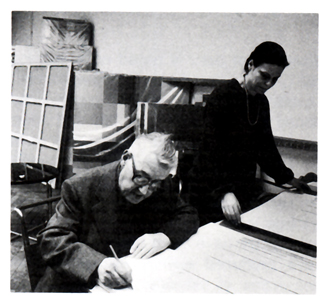 Richard Paul Lohse (September 13, 1902, Zurich - September 16, 1988, Zurich) was a Swiss painter and graphic artist and one of the main representatives of the concrete and constructive art movements.

Lohse was born in Zürich in 1902. His wish to study in Paris was thwarted due to his difficult economic circumstances. In 1918, he joined the advertising agency Max Dalang, where he trained to become an advertising designer. Lohse, then an autodidact, painted expressive, late-cubist still lifes.

In the 1930s, his work as a graphic artist and book designer placed him among the pioneers of modern Swiss graphic design; in paintings of this period, he worked on curved and diagonal constructions. Success eventually allowed him to establish his own graphic design studio in Zürich.

He combined art with a political and moral awareness, which led him to be an activist for immigrants. In the 1930s, he was actively involved in protests, which were illegal under the government of the time. He continued to protest until the beginning of World War II.

In 1937, Lohse co-founded Allianz, an association of Swiss modern artists, with Leo Leuppi. In 1938, he helped Irmgard Burchard, to whom he was married for a brief time, to organise the London exhibition "Twentieth Century German Art". His political convictions then led him into the resistance movement, where he met his future wife Ida Alis Dürner.

The year 1943 marked a breakthrough in Lohse's painting: he standardised the pictorial means and started to develop modular and serial systems. In 1953, he published the book New Design in Exhibitions, and from 1958, he became co-editor of the magazine Neue Grafik/New Graphic Design.

Lohse's typical classic paintings are nonrepresentational, systematic, two-dimensional laminar planes of interacting colour elements in various logical/mathematical relations visible to the eye, using the structure of colour that we perceive, and in a way that every element plays an equal qualitative role.

1918 Apprentice in graphic design at Max Dalang AG (until 1922); studies at the Kunstgewerbeschule Zürich under Ernst Keller

1922 Employed in the advertising studio of Max Dalang AG, where he meets Hans Neuburg and Anton Stankowski

1934 Studio and apartment in the Zett-Haus, Zürich, together with artist and gallerist Irmgard Burchard; member of the association Friends of New Architecture