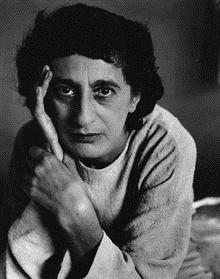 Anni Albers (born Annelise Else Frieda Fleischmann; June 12, 1899 – May 9, 1994) was a German textile artist and printmaker. She is perhaps the best known textile artist of the 20th century.

Albers eventually decided to attend art school, even though the challenges for art students were often great and the living conditions harsh. Such a lifestyle sharply contrasted the affluent and comfortable living that she had been used to. She attended the Kunstgewerbeschule in Hamburg for only two months in 1919, then in April 1922 began her studies at the Bauhaus at Weimar.

At the Bauhaus she began her first year under Georg Muche and then Johannes Itten. Women were barred from certain disciplines taught at the school and during her second year, unable to get into a glass workshop with future husband Josef Albers, Albers deferred reluctantly to weaving, the only workshop available to her. With her instructor Gunta Stölzl, however, Albers soon learned to appreciate the challenges of tactile construction and began producing geometric designs.Template:Baro, Gene. 'Anni Albers.' Brooklyn Museum, Brooklyn, NY. 1997.

In 1925, Anni and Josef Albers, the latter having rapidly become a "Junior Master" at the Bauhaus, were married. The school moved to Dessau in 1926, and a new focus on production rather than craft at the Bauhaus prompted Albers to develop many functionally unique textiles combining properties of light reflection, sound absorption, durability, and minimized wrinkling and warping tendencies. She had several of her designs published and received contracts for wall hangings .

For a time Albers was a student of Paul Klee, and after Gropius left Dessau in 1928 Josef and Anni Albers moved into the teaching quarters next to both the Klees and the Kandinskys. During this time, the Albers began their lifelong habit of travelling extensively: first through Italy, Spain, and the Canary Islands.

When Gunta Stölzl left the Bauhaus in 1931, Anni Albers took over her role as Head of the Weaving Workshop, making her one of the few women to hold such a senior role at the school.

The Bauhaus at Dessau was closed in 1932 under pressure from the Nazi party and moved briefly to Berlin, permanently closing a year later in August 1933. Anni and Joseph Albers were invited by Philip Johnson to teach at the experimental Black Mountain College in North Carolina, arriving stateside in November 1933. Both taught at Black Mountain until 1949. During these years Anni Albers's design work, including weavings, were shown throughout the US. Albers wrote and published many articles on design.

In 1949, Anni Albers became the first designer to have a one-person exhibition at the Museum of Modern Art in New York City. Albers's design exhibition at MoMA began in the fall and then toured the US from 1951 until 1953, establishing her as one of the most important designers of the day. During these years, she also made many trips to Mexico and throughout the Americas, and became an avid collector of pre-Columbian artwork.

After leaving Black Mountain in 1949, Anni moved with her husband to Connecticut, and set up a studio in her home. After being commissioned by Gropius to design a variety of bedspreads and other textiles for Harvard, and following the MoMA exhibition, Albers spent the 1950s working on mass-producible fabric patterns, creating the majority of her "pictorial" weavings, and publishing a half-dozen articles and a collection of her writings, On Designing.