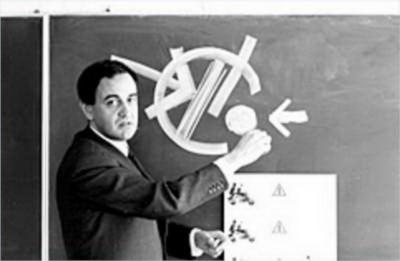 Tomás Maldonado (born 25 April 1922) is an Argentine painter, designer and thinker, considered one of the main theorists of design theory of the legendary Ulm Model, a design philosophy developed during his tenure (1954–1967) at the Ulm School of Design (Hochschule für Gestaltung – HfG) in Germany.

In this early period he was involved with the Argentine Avant Gardes, in fact, he was one of the founders of the painters' movement called Arte Concreto-Invención.

Between 1964 and 1967, in collaboration with his German colleague Gui Bonsiepe he created a system of codes for the design program of the Italian firm Olivetti and the department store La Rinascente. In 1967 he established himself in Milan, continuing to teach in the Faculty of Philosophy and Literature of the University of Bologna, working almost entirely now in philosophy and criticism influenced by semiotics. In one of his last essays, "The Heterodox", he claims that the role of the intellectual is to awaken or reveal the collective conscience.