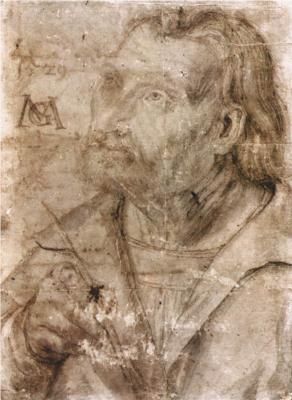 Matthias Grünewald (c. 1470 – 31 August 1528) was a German Renaissance painter of religious works who ignored Renaissance classicism to continue the style of late medieval Central European art into the 16th century. His first name is also given as Mathis and his surname as Gothart or Neithardt. Only ten paintings—several consisting of many panels—and thirty-five drawings survive, all religious, although many others were lost at sea in the Baltic on their way to Sweden as war booty. His reputation was obscured until the late nineteenth century, and many of his paintings were attributed to Albrecht Dürer, who is now seen as his stylistic antithesis. His largest and most famous work is the Isenheim Altarpiece created c 1512 to 1516.

The details of his life are unusually unclear for a painter of his significance at this date, despite the fact that his commissions show that he had reasonable recognition in his own lifetime. The first source for his biography is the German art historian Joachim von Sandrart, who describes him around 1505 working on the exterior decoration of an altarpiece by Albrecht Dürer in Frankfurt. This is the sort of work typically performed by apprentices and therefore an estimate of his age can be reached, suggesting he was born in 1475. Sandrart records that Grünewald had as an apprentice the painter Hans Grimmer, who would become famous in his time, but most of whose works were lost in the Thirty Years' War. Sandrart describes Grünewald as leading a withdrawn and melancholy life, and marrying unhappily.

More recent investigations have provided further information on Grünewald's life. In 1511 he became court artist of Uriel von Gemmingen, Archbishop of Mainz, and he also worked for the next archbishop, Albert of Brandenburg. In 1512 he settled in nearby Frankfurt where records indicate he bought a house and married Anna, a converted Jew, then probably aged 18. The marriage was not happy and in 1523 she would be institutionalised with what is variously described as mental illness and demonic possession.

From 1512 to 1514 or 1515 he worked on the Isenheim altarpiece, apparently in partnership with another Mathis, variously surnamed Nithart, Neithart, von Würzburg (after his place of birth), or Gothardt. Grünewald seems to have left Isenheim in a hurry, returning to Frankfurt, and his subsequent poverty suggests he was not fully paid for the altarpiece. In 1527 he entered the services of the wealthy and noble von Erbach family, apparently with a child (whether his own or adopted, is unclear). He most probably died in 1532, although sources vary.

There has been considerable uncertainty about the details of his life. In 1938 Walter Karl Zülch published the theory that Grünewald and his partner Nithart/Gothardt were the same person; this Nithart/Gothardt was a painter, engineer, and "water artist" born in Würzburg in the 1460s or maybe 1470s and probably dying in 1528. This theory is now generally discredited, although more recent historians believe Nithart/Gothardt may have pretended to be Grünewald for business reasons.

Grünewald's first dated painting is probably in Munich, dated 1503 on a much later note which apparently records an older inscription. There is much speculation about Grünewald's politics, with some people associating him with the Reformation or support for the lower classes. He may have left the Archbishop of Mainz because of sympathies either with the German Peasants' War, or Lutheranism (he had some Lutheran pamphlets and papers at his death).