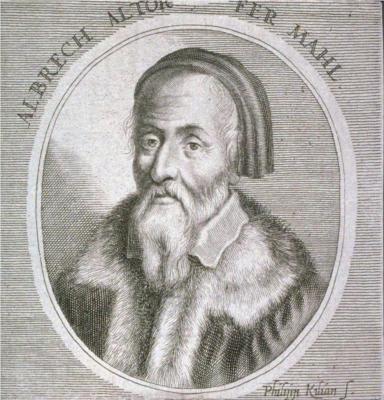 Albrecht Altdorfer (c. 1480 – February 12, 1538) was a German painter, engraver and architect of the Renaissance working in Regensburg. Along with Lucas Cranach the Elder and Wolf Huber he is regarded to be the main representative of the so-called Danube School setting biblical and historical subjects against landscape backgrounds of expressive colours. As an artist also making small intricate engravings he is seen to belong to the Nuremberg Little Masters.

Altdorfer was born in Regensburg or Altdorf around 1480.

He acquired an interest in art from his father, Ulrich Altdorfer, who was a painter and miniaturist. At the start of his career, he won public attention by creating small, intimate modestly scaled works in unconventional media and with eccentric subject matter. He settled in the free imperial city of Regensburg, a town located on the Danube River in 1505, eventually becoming the town architect and a town councillor. His first signed works date to c. 1506, including engravings and drawings such the Stygmata of St. Francis and St. Jerome. His models were niellos and copper engravings from the workshops of Jacopo de Barbari and Albrecht Dürer.

Around 1511 or earlier, he travelled down the river and south into the Alps, where the scenery moved him so deeply that he became the first landscape painter in the modern sense, making him the leader of the Danube School, a circle that pioneered landscape as an independent genre, in southern Germany. From 1513 he was at the service of Maximilian I in Innsbruck, where he received several commissions from the imperial court. During the turmoil of the Protestant Reformation, he dedicated mostly to architecture; paintings of the period, showing his increasing attention to architecture, include the Nativity of the Virgin.

In 1529 he executed The Battle of Alexander at Issus for Duke William IV of Bavaria. In the 1520s he returned to Regensburg as a wealthy man, and became a member of the city's council. He was also responsible for the fortifications of Regensburg.

In that period his works are influenced by artists such as Giorgione and Lucas Cranach, as shown by his Crucifixion. In 1535 he was in Vienna. He died at Regensburg in 1538.

The remains of Altdorfer's surviving work comprises 55 panels, 120 drawings, 125 woodcuts, 78 engravings, 36 etchings, 24 paintings on parchment, and fragments from a mural for the bathhouse of the Kaiserhof in Regensburg. This production extends at least over the period 1504–1537. He signed and dated each one of his works.

Altdorfer was the pioneer painter of pure landscape, making them the subject of the painting, as well as compositions dominated by their landscape; these comprise much of his oeuvre. He believed that the human figure should not disrupt nature, but rather participate in it or imitate its natural processes. Taking and developing the landscape style of Lucas Cranach the Elder, he shows the hilly landscape of the Danube valley with thick forests of drooping and crumbling firs and larches hung with moss, and often dramatic colouring from a rising or setting sun. His Landscape with Footbridge (National Gallery, London) of 1518–1520 is claimed to be the first pure landscape in oil. In this painting, Altdorfer places a large tree that is cut off by the margins at the center of the landscape, making it the central axis and focus within the piece. He uses anthropomorphism to give the tree human qualities such as the drapery of its limbs. He also made many fine finished drawings, mostly landscapes, in pen and watercolour such as the Landscape with the Woodcutter in 1522. The drawing opens at ground level on a clearing surrounding an enormous tree that is placed in the center, dominating the picture. It poses and gesticulates as if it was human, splaying its branches out in every corner. Halfway up the tree trunk, hangs a gabled shrine. At the time, a shrine like this might shelter an image of the Crucifixion or the Virgin Mary, but since it is turned away from the viewer, we are not sure what it truly is. At the bottom of the tree, a tiny figure of a seated man, crossed legged, holds a knife and axe, declaring his status in society/occupation.