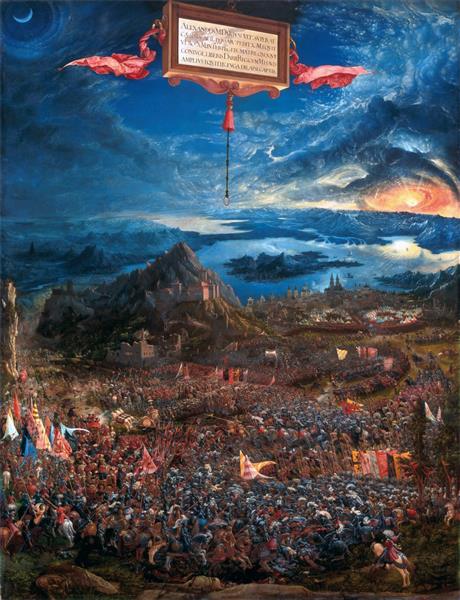 The battle of Issus

The Battle of Alexander at Issus (German: Alexanderschlacht) is a 1529 oil painting by the German artist Albrecht Altdorfer (c. 1480–1538), a pioneer of landscape art and a founding member of the Danube school. It portrays the 333 BC Battle of Issus, in which Alexander the Great secured a decisive victory over Darius III of Persia and gained crucial leverage in his campaign against the Persian Empire. The painting is widely regarded as Altdorfer's masterpiece, and is one of the most famous examples of the type of Renaissance landscape painting known as the world landscape, which here reaches an unprecedented grandeur.

Duke William IV of Bavaria commissioned The Battle of Alexander at Issus in 1528 as part of a set of historical pieces that was to hang in his Munich residence. Modern commentators suggest that the painting, through its abundant use of anachronism, was intended to liken Alexander's heroic victory at Issus to the contemporary European conflict with the Ottoman Empire. In particular, the defeat of Suleiman the Magnificent at the Siege of Vienna may have been an inspiration for Altdorfer. A religious undercurrent is detectable, especially in the extraordinary sky; this was probably inspired by the prophecies of Daniel and contemporary concern within the Church about an impending apocalypse. The Battle of Alexander at Issus and four others that were part of William's initial set are in the Alte Pinakothek art museum in Munich.

Alexander III of Macedon (356–323 BC), best known as Alexander the Great, was an Ancient Greek king of Macedon who reigned from 336 BC until his death. He is widely regarded as one of the greatest military tacticians and strategists in history, and is presumed undefeated in battle. Renowned for his military leadership and charisma, he always led his armies personally and took to the front ranks of battle. By conquering the Persian Empire and unifying Greece, Egypt and Babylon, he forged the largest empire of the ancient world and effected the spread of Hellenism throughout Europe and Northern Africa.

Alexander embarked on his expedition to conquer the Persian Empire in the spring of 334 BC, having pacified the warring Greek states and consolidated his military might. During the first months of the Macedonian passage into Persian Asia Minor, Darius III – king of Persia – largely ignored the presence of Alexander's 40,000 men. The Battle of the Granicus, fought in May, was Persia's first major effort to confront the invaders, but resulted in an easy victory for Alexander. Over the next year, Alexander took most of western and coastal Asia Minor by forcing the capitulation of the satrapies in his path. He continued inland, travelling northeast through Phyrgia before turning southeast toward Cilicia. After passing the Cilician Gates in October, Alexander was delayed by fever in Tarsus. Darius meanwhile mustered an army of up to 100,000 (some ancient sources posit exaggerated figures of over 600,000) and personally directed it over the eastern slopes of the Amanus Mountains. In early November, as Alexander proceeded about the Gulf of Issus from Mallus via Issus, the two armies inadvertently passed one another on opposite sides of the mountains. This was decidedly to Darius' advantage: now at the rear of Alexander, he was able to prevent retreat and block the supply lines Alexander had established at Issus. It was not until Alexander had encamped at Myriandrus, a seaport on the southeastern shores of the Gulf of İskenderun, that he learned of the Persian position. He immediately retraced his route to the Pinarus River, just south of Issus, to find Darius' force assembled along the northern bank. The Battle of Issus ensued.