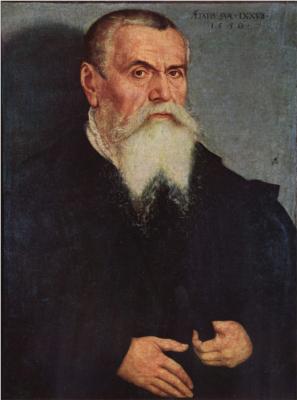 Lucas Cranach the Elder (German: Lucas Cranach der Ältere German pronunciation: [ˈluːkas ˈkʁaːnax dɛɐ̯ ˈʔɛltəʁə], c. 1472 – 16 October 1553) was a German Renaissance painter and printmaker in woodcut and engraving. He was court painter to the Electors of Saxony for most of his career, and is known for his portraits, both of German princes and those of the leaders of the Protestant Reformation, whose cause he embraced with enthusiasm. He was a close friend of Martin Luther. Cranach also painted religious subjects, first in the Catholic tradition, and later trying to find new ways of conveying Lutheran religious concerns in art. He continued throughout his career to paint nude subjects drawn from mythology and religion.

Cranach had a large workshop and many of his works exist in different versions; his son Lucas Cranach the Younger and others continued to create versions of his father's works for decades after his death. He has been considered the most successful German artist of his time.

He was born at Kronach in upper Franconia, probably in 1472. His exact date of birth is unknown. He learned the art of drawing from his father Hans Maler (his surname meaning "painter" and denoting his profession, not his ancestry, after the manner of the time and class). His mother, with surname Hübner, died in 1491. Later, the name of his birthplace was used for his surname, another custom of the times. How Cranach was trained is not known, but it was probably with local south German masters, as with his contemporary Matthias Grünewald, who worked at Bamberg and Aschaffenburg (Bamberg is the capital of the diocese in which Kronach lies). There are also suggestions that Cranach spent some time in Vienna around 1500.

According to Gunderam (the tutor of Cranach's children) Cranach demonstrated his talents as a painter before the close of the 15th century. His work then drew the attention of Duke Friedrich III, Elector of Saxony, known as Frederick the Wise, who attached Cranach to his court in 1504. The records of Wittenberg confirm Gunderam's statement to this extent that Cranach's name appears for the first time in the public accounts on the 24 June 1504, when he drew 50 gulden for the salary of half a year, as pictor ducalis ("the duke's painter"). Cranach was to remain in the service of the Elector and his successors for the rest of his life, although he was able to undertake other work.

Cranach married Barbara Brengbier, the daughter of a burgher of Gotha and also born there; she died at Wittenberg on 26 December 1540. Cranach later owned a house at Gotha, but most likely he got to know Barbara near Wittenberg, where her family also owned a house, that later also belonged to Cranach.

The first evidence of Cranach's skill as an artist comes in a picture dated 1504. Early in his career he was active in several branches of his profession: sometimes a decorative painter, more frequently producing portraits and altarpieces, woodcuts, engravings, and designing the coins for the electorate.