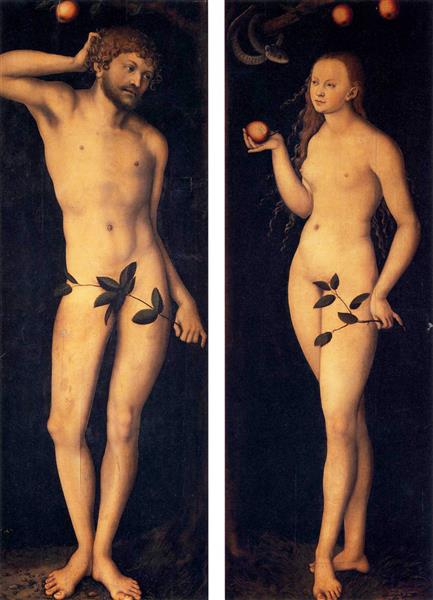 Adam and Eve is a double painting by German Renaissance master Lucas Cranach the Elder, dating from 1528, housed in the Uffizi, Florence, Italy. There are other paintings by the same artist with the same title, one, for instance housed in The Art Imstitute of Chicago.

The two biblical ancestors are portrayed, in two different panels, on a dark background, standing on a barely visible ground. Both hold two small branches which cover their sexual organs. Eve holds the traditional apple, with the snake coming to her from above from the tree of life. Adam is shown scratching the right crown part of his scalp.

The work was part of the Tuscan Grand Dukes' collections since as early as 1688, and is included in the Uffizi since the beginning of the 18th century. Filippo Baldinucci attributed it to Albrecht Dürer, until the inventory of 1784 assigned it to Cranach.

The subject continues Dürer's anatomy studies, which had culminated in his large Adam and Eve panels now in the Museo del Prado. These were the first real size nudes painted by a German artist. During his stay in Vienna, Cranach had frequented some groups of humanists who were near to Dürer, and from there he was inspired to do a first, smaller version of the theme of Adam and Eve in 1510, presently housed in the Warsaw gallery.