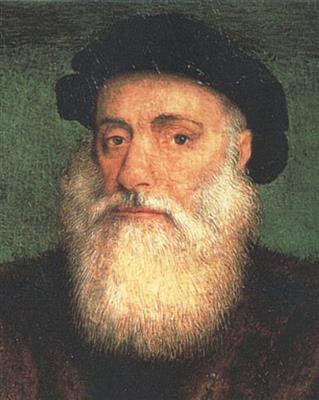 Gregório Lopes (c. 1490 – 1550) was one of the most important Renaissance painters from Portugal.

The work of Gregório Lopes mainly consists of painted religious altarpieces for various churches and monasteries in central Portugal. Between 1520 and 1525 he worked (together with Jorge Leal) in painting altarpieces for the Saint Francis Convent of Lisbon. Also in the 1520s he painted panels for the Church of Paraíso (Paradise), also in Lisbon. In his first fase, Gregório Lopes also worked in Sesimbra, Setúbal and in the Monastery of Ferreirim, in this latter case together with Cristóvão de Figueiredo and Garcia Fernandes.

The painter moved in the 1530s to the city of Tomar, where he painted various panels for the Round Church of the Convent of Christ (1536–1539) and the main altarpiece of the Church of Saint John the Baptist (1538–1539). His last known works include altarpieces for the Convent of Santos-o-Novo in Lisbon (1540) and the Valverde Convent, near Évora (1545).

Many of Gregório Lopes' works can be seen in the National Museum of Ancient Art, in Lisbon. His son, Cristóvão Lopes (1516–1594), was also an artist and worked as a portrait painter for the Portuguese royal family.