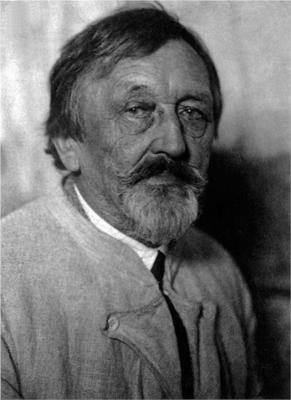 Painter, printmaker. Took up painting as a teenager while convalescing from an infection that ultimately cost him a leg. Began formal studies in Weimar in 1870. Initially painted large-scale landscapes, working successively through academic, naturalist, Impressionist, and Neo-Impressionist styles. In 1901 left Weimar for Hagen at urging of collector Karl Ernst Osthaus, who offered him a studio in the modern art museum he was establishing there. Through this exposure to the avant-garde, including meeting Edvard Munch in 1904 and Emil Nolde a year later, and seeing Van Gogh's choppy brushstrokes and vibrant coloring, his work moved into its final, Expressionist phase.

Made first of 185 prints at age sixty, in 1908, after seeing an exhibition of Brücke prints. Aside from two lithographs, worked exclusively in woodcut and linoleum cut. Rarely editioned his work, preferring to create unique or variant impressions by hand-printing his own blocks, which he inked with a brush and then printed through rubbing or by applying pressure from a weighted cigar box. Concentrated mostly on figurative subjects, as well as biblical themes in response to World War I. Stopped making new motifs in 1926, but continued printing new impressions from old blocks.

In 1937 Nazis expelled him from the Prussian Academy of Arts, condemned him as degenerate, and removed 412 of his works from public collections.

Christian Rohlfs (November 22, 1849 – January 8, 1938) was a German painter, one of the important representatives of German expressionism.

He was born in Groß Niendorf, Kreis Segeberg in Prussia. He took up painting as a teenager while convalescing from an infection that was eventually to lead to the amputation of a leg in 1874. He began his formal artistic education in Berlin, before transferring, in 1870, to the Weimar Academy. Initially he painted large-scale landscapes, working through a variety of academic, naturalist, Impressionist, and Post-Impressionist styles. In 1901 left Weimar for Hagen, where the collector Karl Ernst Osthaus had offered him a studio in the modern art museum he was setting up there. Meetings with Edvard Munch and Emil Nolde and the experience of seeing the works of Vincent van Gogh inspired him to move towards the expressionist style, in which he would work for the rest of his career.

In 1908, at the age of 60, he made his first prints after seeing an exhibition of works by the expressionist group Die Brücke. He went on to make 185 in total, almost all woodcuts or linocuts.

He lived in Munich and the Tyrol in 1910–12, before returning to Hagen. In 1929 the town of Hagen opened a Christian Rohlfs Museum.In 1937 the Nazis expelled him from the Prussian Academy of Arts, condemned his work as degenerate, and removed his works from public collections.He died in Hagen, Westfalia, on January 8, 1938.