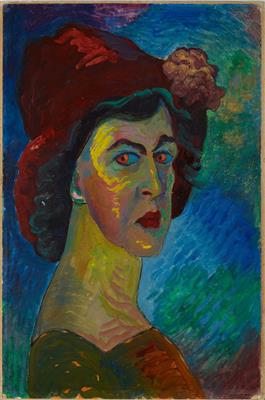 Marianne von Werefkin was born in the Russian town of Tula as the daughter of the commander of the Ekaterinaburg Regiment. She had her first private academic drawing lessons at the age of fourteen. In 1880, she became a student of Ilya Repin, the most important painter of Russian Realism. Her progress was dealt a setback by a hunting accident in 1888 in which she accidentally shot her right hand which remained crippled after a lengthy period of recovery. By practicing persistently she finally managed to use drawing and painting instruments with her right hand again.

In 1892 she met Alexej von Jawlensky, who desired to be her protégé, and in 1896 she, Jawlensky, and their servant moved to Munich. For the sake of Jawlensky's painting, Werefkin interrupted her painting for almost ten years. She initiated a Salon in Munich which soon became a center of lively artistic exchange. She also founded the “Lukasbruderschaft” of which also Kandinsky was a member.

She began painting again in 1906. In 1907 she created her first expressionist works; in these she followed Paul Gauguin's and Louis Anquetin's style of "surface painting", while also showing the influence of Edvard Munch. She and Jawlensky spent in 1908 several periods working with Kandinsky and Münter after their discovery of the picturesque rural town of Murnau near Munich, where Gabriele Münter owned a house. The four artists frequently painted together in open air in and around Murnau.

They founded a new artist-group in 1909, the Neue Künstlervereinigung München (New Association of Artists in Munich, NKVM). It became a forum of exhibitions and programming. After a few years Wassily Kandinsky and Franz Marc distanced themselves from this group and formed the Blauer Reiter (Blue Rider). The group was founded by a number of Russian emigrants, including Wassily Kandinsky, Alexej von Jawlensky and a number of native German artists, such as Franz Marc, August Macke and Gabriele Münter. Werefkin began exhibiting together with this group in 1913.

At the outbreak of the First World War, Werefkin and Jawlensky immigrated to Switzerland, near Geneva. They later moved to Zurich. By 1918, they had separated, and Werefkin moved alone to Ascona, on Lago Maggiore where she painted many colorful, landscapes in an expressionist style. In 1924 she founded the artist group "Großer Bär" (i.e., Big Bear, Ursa Major).

In her later years, she painted posters. Her friends "Carmen" and "Diego Hagmann" protected her from poverty.

Marianne von Werefkin died in Ascona on 6 February 1938. She was buried in the Russian graveyard in Ascona.