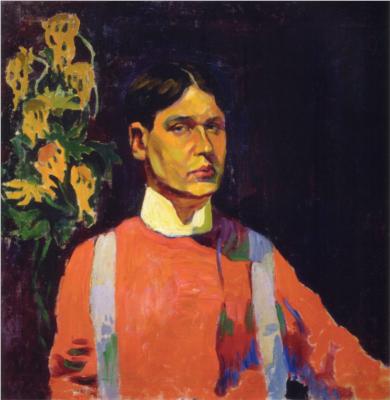 Aristarkh Lentulov was born in the town of Nizhny Lomov in Penza Oblast, Russia into the family of a rural priest. He studied art in the Penza and Kiev art schools from 1897 to 1905, and then in the private studio of Dmitry Kardovsky in Saint Petersburg in 1906.

He lived in Moscow from 1909, and he was one of the founders of the avant-garde exhibiting association of artists, the Jack of Diamonds group. This group remained active until its dissolution in 1916.

From 1910 to 1911 Lentulov studied at the studio of Henri Le Fauconnier and the Académie de La Palette in Paris. The 1910s were for Lentulov a period of creative productivity and experimentation. He was drawn to Orphism influenced by the French artist Robert Delaunay. Whilst there, he became acquainted with contemporary French painters such as Albert Gleizes, Jean Metzinger, Fernand Léger and Robert Delaunay and after absorbing fauvists' and cubists' principles, developed his own unique coulorful style of painting. Later, after his return to Russia in 1912 he became a major influence on what to become the Russian futurism and in particular Cubo-Futurism. Wassily Kandinsky and Kazimir Malevich were both influenced by him.

From pre-revolutionary times, Lentulov was actively involved in various theatrical projects, designing for plays in the Kamerny Theatre (The Merry Wives of Windsor, 1916) and contributing sets for a production of Scriabin's Prometheus in the Bolshoi Theatre in 1919.

In 1928 Lentulov entered into the Society of Moscow artists, which included artists formerly associated with the Jack of Diamonds group. He became chairman of the Society and also started teaching at the Russian state art and technical school (VKhUTEMAS).

Lentulov died in Moscow and is buried in the Vagankovo Cemetery.