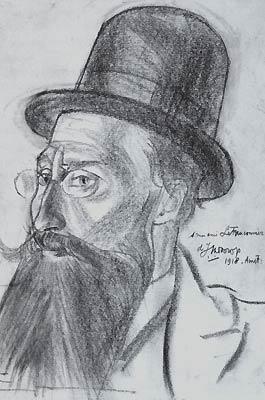 Henri Victor Gabriel Le Fauconnier (July 5, 1881 – December 25, 1946) was a French Cubist painter born in Hesdin. Le Fauconnier was seen as one of the leading figures among the Montparnasse Cubists. At the 1911 Salon des Indépendants Le Fauconnier and colleagues Jean Metzinger, Albert Gleizes, Fernand Léger and Robert Delaunay caused a scandal with their Cubist paintings. He was in contacts with many European avant-garde artists such as Wassily Kandinsky, writing a theoretical text for the catalogue of the Neue Künstlervereinigung in Munich, of which he became a member. His paintings were exhibited in Moscow reproduced as examples of the latest art in Der Blaue Reiter Almanach (The Blue Rider Almanac).

In 1901 Henri Le Fauconnier moved from northern France to Paris, where he studied law, then attended painting classes in the studio of Jean-Paul Laurens, then in the Academie Julian. He changed his from Fauconnier to Le Fauconnier and exhibited at the Salon des Indépendants in 1904 and 1905, implementing bold colors in line with Henri Matisse. He moved to Brittany in 1907 and painted the rocky landscapes of Ploumanac'h in a proto-Cubist style characterized by chastened tones of brown and greens with thick outlines delimiting the simplified forms.

He explored a personal style and put it into practice; painting nudes or portraits (such as that of the poet Pierre Jean Jouve in 1909 (Musée National d'Art Moderne). Under the influence of Paul Cézanne he developed his own form of Cubism. Back in Paris, he mingles with the artistic and literary gathered around Paul Fort at the Closerie des Lilas in Montparnasse.

Louis Vauxcelles, in his review of the 1910 Salon des Indépendants, made a passing and inaccurate reference to Le Fauconnier, Jean Metzinger, Albert Gleizes, Robert Delaunay and Fernand Léger, as "ignorant geometers, reducing the human body, the site, to pallid cubes."

Metzinger had written in 1910 of 'mobile perspective' as an interpretation of what would soon become known as "Cubism" with respect to Picasso, Braque, Delaunay and Le Fauconnier.

At the invitation of Wassily Kandinsky, Le Fauconnier published a theoretical text in the catalog of the Neue Künstlervereinigung (Munich, 1910). He opened his Rue Visconti studio in Paris to artists eager like him to apply the lessons of Cézanne. With Jean Metzinger, Albert Gleizes, Fernand Léger, Robert Delaunay, he contributed to the Cubist scandal of the 1911 Salon des Indépendants. Le Fauconnier exhibited his vast Les Montagnards attaqués par des ours (Mountaineers Attacked by Bears) at the Salon d'Automne of 1912 (Paris).