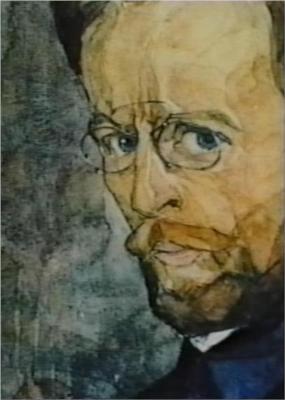 Alexander Bogomazov or Oleksandr Bohomazov (Russian: Александр Константинович Богомазов, Ukrainian: Олександр Костянтинович Богомазов; born April 7, 1880, in Yampol, Russian Empire - on June 3, 1930, in Kiev, Ukrainian SSR, Soviet Union) was a Ukrainian painter, known artist and modern art theoretician of the Russian Avant-garde (historically the term "Russian Avant-garde" refers to the art of all countries which were parts of Russia/USSR in the beginning of 20th century). In 1914, Alexander wrote his treatise The Art of Painting and the Elements. In it he analyzed the interaction between Object, Artist, Picture, and Spectator and sets the theoretical foundation of modern art. During his artistic life Alexander Bogomazov mastered several art styles. The most known are Cubo-Futurism (1913–1917) and Spectralism (1920–1930).

Alexander Bogomazov was born in Yampol, Kharkov Governorate, as a second child to Konstantin Bogomazov. His mother Anisia abandoned the family shorty after his baptism. His ethnic background was Russian, yet Alexander spent virtually all his life in Kiev.

From 1896 to 1902, Aleksander Bogomazov attended the Institute for Agriculture in Kherson. From 1902 to 1905, he attended the Kiev Art School (KKHU), at the same time he had close contact with Alexander Archipenko and Aleksandra Ekster.

In 1905, he participated in political demonstrations and strikes. In the same year he was expelled from the Kiev Art School. In 1906, he studied in the studio of S. Swiatoslavskiy. Bogomazov had an exhibition in Kiev, together with Archipenko. That year he moved to Moscow and became the student of Fyodor Rerberg and Konstantin Yuon.

In 1907, he returned to Kiev. After 1907, he had regular exhibitions in Kiev, including the Association of Russian Artists and the Moscow Society of Independent Artists. In 1908, he participated in the exhibition with the group of artists Zveno (The Link) in Kiev together with David Burliuk, Wladimir Burliuk, Aleksandra Ekster and others.

In 1911, he journeyed to Finland. From 1912 to 1915, he taught at a school for the deaf and mute in Kiev. From 1913 to 1914, he studied the works of the Italian Futurists. At this time he developed art theories, and published his essay The Art of Painting and the Elements. In 1914, he organized the exhibition Kiltse ("The Ring") in Kiev, together with Aleksandra Ekster, Eugène Konopatzky among others. In 1915, Bogomazov moved to the Caucasus, where he worked as a teacher and painter.

In 1919, he taught at the First State Studio for Paintings and Decorative art in Kiev. From 1919 to 1920, he was the Head of the Department for Art Education in the Ukrainian Commissariat for Visual Art. At the same time he was the co-founder of the Ukrainian Agitprop Movement, and created designs for the Agitprom movement. From 1922 to 1930, he taught at the Kiev Art Academy (KKHI) together with Vadim Meller, Vladimir Tatlin, Victor Palmov. In 1927, he was a founding member of the Association of the Revolutionary Masters of Ukraine (ARMU), together with D.Burliuk, V.Meller, V.Palmov, V. Yermilov and others. In the same year, he participated in the All-Ukrainian Exhibition Ten years October (Kharkov, Kiev, Odessa), together with Tatlin, Meller, Palmov, Epshtein among others.