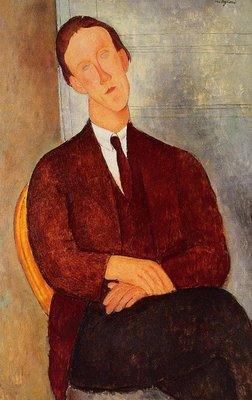 Morgan Russell (January 25, 1886 – May 29, 1953) was a modern American artist. With Stanton Macdonald-Wright, he was the founder of Synchromism, a provocative style of abstract painting that dates from 1912 to the 1920s. Russell's "synchromies," which analogized color to music, were an early American contribution to the rise of Modernism.

Russell was born and raised in New York City. He initially studied architecture and, after 1903, became friendly with the sculptor Arthur Lee, for whom he posed as a model and with whom lived with for a time. From 1903 to 1905, he studied sculpture at the Art Students League with Lee and James Earle Fraser; he also posed as a model for the sculpture class. With financial help from Gertrude Vanderbilt Whitney, whom he met at the League in January 1906, he traveled to Europe to study art in Paris and Rome. Mrs. Whitney was one of the earliest and staunchest believers in Russell's talent and provided him with a monthly stipend for several years. In 1907, after returning to New York City, Russell studied painting at the New York School of Art with the noted Ashcan painter Robert Henri, among others. Returning to Paris in 1909, he studied at Matisse’s art school, frequented Gertrude Stein's salon, and met Picasso and Rodin.

In Paris, Russell met Stanton Macdonald-Wright, a fellow expatriate, in 1911, and soon after the two began developing theories about color and its primacy in the creation of a meaningful work of art. Like other young adventurous artists of the time, they had come to view academic realism as a dead-end and were pondering the possibilities of an art form that might minimize or even abandon representational content. They were particularly interested in the theories of their teacher, Canadian painter Percyval Tudor-Hart, who believed that colors could be orchestrated in the same harmonious way that a composer arranges notes in a symphony. Inspired by their experience of Delacroix, the Post-Impressionists, and the Fauves, Russell and Macdonald-Wright co-founded Synchromism in 1912. In June of the same year, they held their first Synchromist exhibition at Der Neue Kunstsalon in Munich, followed four months later by another exhibition at Galerie Bernheim-Jeune in Paris. Like other young modernists eager to make a name for themselves, they issued a manifesto broadcasting their goals, plastered the kiosks of Paris with notices of their show, and hoped to create a sensation. Russell also began exhibiting at the Salon des Indépendants in 1913.

Synchromism was an early innovation in pure abstraction, which was developed primarily by Russell with contributions from Stanton Macdonald-Wright. Other American painters in Paris experimenting with Synchromism at the time included Thomas Hart Benton, Andrew Dasburg, and Patrick Henry Bruce, all of whom were friends with Russell and Macdonald-Wright. Bruce was also friendly with Sonia and Robert Delaunay and the proponents of Orphism, (a term coined in 1912 France by the poet Guillaume Apollinaire), a movement whose similarities to Synchromism led to later charges of plagiarism, which both Russell and Macdonald-Wright vehemently denied.