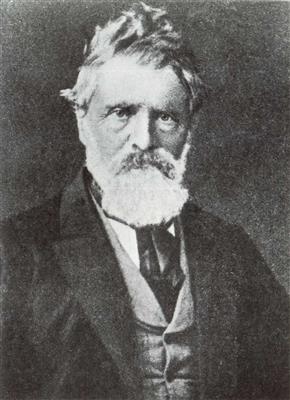 Peder Balke (November 4, 1804 – February 5, 1887) was a Norwegian painter. He is known for portraying the landscape of Norway in a romantic and dramatic manner. He was also active in the field of social justice.

Peder Balke (November 4, 1804 – February 5, 1887) was a Norwegian painter. He is known for portraying the landscape of Norway in a romantic and dramatic manner. He was also active in the field of social justice.

Peter Andersen was born on the island of Helgøya, in Hedmark county, Norway. He grew up in Ringsaker, but lived in the 1820s on the Balke farm in Toten in Oppland county. Farmers in Toten paid for his education, and he decorated several farms in Toten in return. They actively encouraged his painting activities and later supported him in obtaining higher education.

In the autumn of 1827, Balke served as an apprentice to Heinrich August Grosch. He was also a student at the Tegneskole under Grosch and Jacob Munch. Balke signed a two-year contract as an apprentice to the Danish decorator and artist Jens Funch. From autumn 1829 to spring 1833, he was a pupil of Carl Johan Fahlcrantz at the art academy in Stockholm. Balke was also a pupil of Johan Christian Dahl from 1843 to 1844.

During the summer of 1830 he walked through Telemark, Rjukan, Vestfjorddalen through Røldal and Kinsarvik to the city of Bergen, and then back through Vossevangen to Gudvangen, further over Filefjell to Valdres and then across the mountains to Hallingdal. Along the way, he painted and drew small sketches that were later developed into paintings. He also traveled to Germany, and Russia. He visited Paris and London.

In Stockholm, he completed several of the paintings he had outlined on his 1832 Finnmark tour. Some of these were sold to the royal family. In 1846 he sold thirty of his paintings to Louis Philippe I of France for the Versailles. Besides the 17 paintings in the National Gallery in Oslo, Peder Balke is also represented at several major art collections in Norway and Sweden.

The National Gallery in London organized the greatest display of his work in the UK, a collection of over 50 paintings, from public and private collections in November 2014 - April 2015.[1] A book containing 62 color plates, notes and chapters; Peder Balke: Vision and Revolution (M.I. Lange), In Quest of the Sublime: Peder Balke and the Romantic Discovery of the North (K.Ljøgodt), Balke / London / Then / Now (C.Riopelle) has been published as 'Paintings by Peder Balke'.

He was married in 1834 to Karen Eriksdatter Strand. He was engaged in social questions and organized the construction of Balkeby, a new part of Oslo, with improved living conditions for workers. He also advocated grants for artists and pensions for men and women. He is the great-grandfather of Turid Balke and great-great-grandfather of Jon Balke.

Peder Balke purchased parcels of the historic Nedre Blindern farm between 1858 and 1876. The Balke association organized the suburb. Plot buyers could borrow money from Balke and construct the building themselves. By 1865, there were 300 people in Balkeby and the area was relatively well populated by workers. Eventually they took in lodgers, so that the population increased.