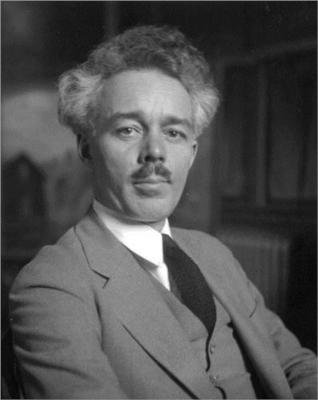 Lawren Harris was a Canadian landscape painter, member and financier of the Canadian art movement called the Group of Seven. Harris was born in a family recently made wealthy through the invention and production of farm machinery: this circumstance created lifelong material security for the artist. His family was strongly religious, so he inherited a commitment to spiritual truth. Since Harris was a child, he showed an interest in drawing. His artistic talent was noticed and encouraged by his parents. At 19, in 1904, he went to Berlin where he privately studied art for three years. His training was academic, focusing on the problem of composition, light, construction of volumes, perspective, as his first sketches of the Berlin streets shown.

Urban scenes that he learned to look at in Berlin were the first subject of his art: his first major oil painting was, in fact, Wellington Street (1910). Although the painting may seem a simple everyday city scene, we can see in it the seeds of what will be the great interest of Harris: nature, captured in the curved line of the trees and the snow on the branches simplified in spots of color. Harris balanced his interest in city scenes with that of Canadian wilderness and landscapes, often painting in Canadian forests.

In 1908, Harris became part of the Toronto Arts and Letters Club. Canadian artists were searching for an authentic way to express their experience of their land. Gradually, the painters began to work together, touring Canada to study and paint landscapes. In 1913, Harris traveled to Buffalo to visit an exhibition of Scandinavian artists. It was like a revelation: in those artists, the vigor of the landscapes had incorporated the decorative manner of Art Nouveau. Thus, the landscapes of Harris changed: large color patterns began to appear in his works, the color became flatter but no less alive, the brushstrokes more evident and ribbon-like, as we can see in Winter sunrise (1913).

In early 1914 Harris and other Canadian painters, J. MacDonald and Tom Thompson started to travel and to work together. They founded the Studio Building, a meeting and working point which enabled the artists to feel like members of a community. They enrolled in the troops fighting in World War I in 1916. Harris was never sent out of Ontario, but he went through two tragedies. In 1917 his brother Howard died overseas, and then Thompson drowned or was murdered during a boat excursion on Canoe Lake. These events brought Harris to a mental breakdown.

In May 1918 he was advised by his doctor to move to the Algoma region to find peace and mental rest. Soon, Harris fell in love with nature and wrote: "There was a wild richness and clarity of colors in the woods. I became conscious that the spirit of the land has to be discovered through its character." The sense of artistic mission was reborn. He restarted work and travel in the wilderness. The sketches that Harris produced in that season caught the eye of Sir Edmund Walker, a financier, and patron who was also president of the Art Gallery of Toronto. Walker exposed some of Harris artworks at the gallery in 1919. In May 1920, Harris and his friends again exhibited at the gallery: the Group of Seven was born.

The more Harris worked in the North, the more direct, forceful, and original his relationship with nature became. He painted the Algoma country from 1919 to 1921, and his technique evolved: trees became bare columns, remote forests turned into simplified masses, the light became more spiritual. In the autumn of 1921, Harris and A.Y. Jackson decided to travel westwards. Harris was awestruck, discovering Lake Superior Country. "I have never seen anything so impressive. That smooth glimmering infinity of waters was like a glimpse of God himself." Harris found an elemental landscape, to which his spirit could respond almost entirely. His Pic Island (1924) is a perfect example of his formal terms, where he would express his profound spiritual vision – an austere landscape, in which the natural world has been transformed into a symbol.

During the 1920s and 1930s, Harris increased his tendency to reduce forms to their essence: mountains, water, islands, forests, and trees became more and more idealized, and the human presence disappeared entirely from his paintings. Harris was also an adherent of theosophy, a movement representing a unique blend of Oriental and Western mysticism. Since his first exposure to theosophy, Harris had been attracted by the theosophy's message of "oneness": the necessary interdependence of all things. For theosophists, the only spirit was present in the universe: a life essence manifested in the light of the Sun. This influenced his art. He was convinced that "art is a realm of life between our mundane world and the world of the spirit, between the infinite diversity of manifested life and the unity or harmony of the spirit, or between the temporal world and the realm of enduring and incorruptible ideation."

Harris translated these ideas into the use of colors: the color blue carried spiritual power, and the white color communicated enlightenment. Harris's North Shore, Lake Superior (1926-1927) is the work that best embodies this philosophy.

The artist had a new inspiration during a trip into western Canada, which began in 1924. His painting became colder, and the form of the subject even more austere than before: mountains became symbolic hands, turned in prayer towards Heaven, struck by light. Isolation Peak (1930) represents a late climax in Harris's struggle to translate his religious ideas into the paint.

The subsequent artistic production of Harris was focused on the top of the world: the Arctic. In 1930, Harris and Jackson sailed to Baffin Island. The icebergs were the last revelation of nature for Harris: they were transfigured into austere and powerful monuments. The painter pushed his landscape's study to the limit. He was 45 years old, and he faced a moment of truth. In a letter written to a friend, he sensed the ending of an era: "I feel as if my painting days are over. I'm at a crossroads, and I have no vision to know what to do, what road to take."

In the second half of the 1930s, Harris entered an exciting new phase in his career, when he began painting abstract pictures, composed of severe geometric forms, which initially derived from his Rocky Mountain and Arctic canvases. Those abstractions were among the first in Canadian art. Harris settled in Vancouver in 1940 and continued to paint until his death in 1970.

Lawren Stewart Harris, CC (October 23, 1885 – January 29, 1970) was a Canadian painter. He was born in Brantford, Ontario, and is best known as a member of the Group of Seven who pioneered a distinctly Canadian painting style in the early twentieth century. A. Y. Jackson has been quoted as saying that Harris provided the stimulus for the Group of Seven. During the 1920s, Harris' works became more abstract and simplified, especially his stark landscapes of the Canadian north and Arctic. He also stopped signing and dating his works so that people would judge his works on their own merit and not by the artist or when they were painted. In 1969, he was made a Companion of the Order of Canada.

Lawren Stewart Harris was born on October 23, 1885 in Brantford, Ontario. The son of Thomas Morgan Harris and Anna Stewart, Harris was an heir to the Massey-Harris fortune. The wealth and status of the family afforded Harris a privileged youth, which allowed him to focus on his painting career. He attended Central Technical School and St. Andrew's College. From age 19 (1904 to 1908) he studied in Berlin. He was interested in philosophy and Eastern thought. Later, he became involved in Theosophy and joined the Toronto Lodge of the International Theosophical Society. Lawren went on to marry Beatrice (Trixie) Phillips on January 20, 1910, and together had three children (Lawren P. Harris, Margaret Anne Harris, Howard K. Harris) born in the first decade of their marriage. Soon after meeting and becoming friends with J. E. H. MacDonald in 1911, they together formed the famous Group of Seven. He financed the construction of a studio building in Toronto with friend Dr. James MacCallum. The Studio provided artists with cheap or free space where they worked.

In 1918 and 1919, Harris financed boxcar trips for the artists of the Group of Seven to the Algoma region, travelling along the Algoma Central Railway and painting in areas such as the Montreal River and Agawa Canyon. In the fall of 1921, Harris ventured beyond Algoma to Lake Superior's North Shore, where he would return annually for the next seven years. While his Algoma and urban paintings of the late 1910s and early 1920s were characterized by rich, bright colours and decorative composition motifs, the discovery of Lake Superior subject material catalyzed a transition to a more austere, simplified style, with limited palettes - often jewel colours with a range of neutral tones. In 1924, a sketching trip with A.Y. Jackson to Jasper National Park in the Canadian Rockies marked the beginning of Harris' mountain subjects, which he continued to explore with annual sketching trips until 1929, exploring areas around Banff National Park, Yoho National Park and Mount Robson Provincial Park. In 1930, Harris went on his last extended sketching trip, travelling to the Arctic aboard the supply ship SS. Beothic for two months, during which time he completed over 50 sketches. The resulting Arctic canvases that he developed from the oil panels marked the end of his landscape period, and from 1935 on, Harris enthusiastically embraced abstract painting. After the disbanding of the Group of Seven in 1933, Harris and the other surviving members including A. J. Casson, Arthur Lismer, A. Y. Jackson, and Franklin Carmichael, were instrumental in forming its successor, the larger national group, the Canadian Group of Painters.