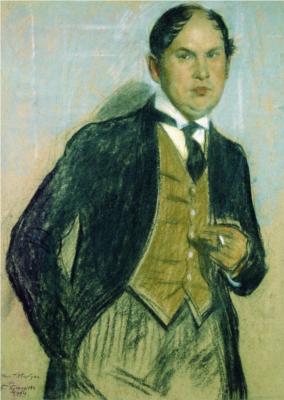 Heorhiy Narbut (Ukrainian: Георгій Іванович Нарбут, 25 February [O.S. 3 March] 1886 in Narbutivka — 23 May 1920 in Kiev) was the most important Ukrainian graphic designer of the twentieth century.

He is known for designing the Coat of arms of Ukraine, banknotes, postage stamps, charters, and his many illustrations in books and magazines. He is also known as Georgy Narbut and George Narbut. He was a brother of a noted Russian Acmeist poet Vladimir Narbut.

Heorhiy Narbut was born in the village Narbutivka, Ukraine not far off from Hlukhiv. His family had origins of ancient Lithuanian nobility. His first painting education was self-taught.

At about age 20, Narbut settled in Saint Petersburg from 1906 to 1917. There he studied with painters Ivan Bilibin and Mstislav Dobuzhinsky. In 1909, Narbut continued some of his studies in Munich, in the school of Simon Hollósy. After his return to Saint Petersburg he joined the organization Mir iskusstva. In 1910-1912 Narbut was an illustrator of the fairy tales Hans Christian Andersen, the fables of Ivan Krylov, and folk tales.

In March 1917, Narbut moved to Kiev. In September 1917, he became professor and rector of the Ukrainian Academy of Arts. During this time he created his Ukrainian banknotes, postage stamps and charters for the newly created Ukrainian National Republic. Narbut also worked on the Ukrainian magazines: Nashe Mynule (Our past), Zori (Stars), and Sontse Truda (The Sun of Work) among others. He died of typhus in 1920.

The dancer Marina Berezowsky (1914-2011) was his daughter. She became a major figure in ballet in Australia.