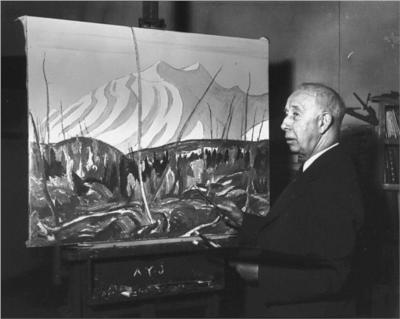 Alexander Young Jackson CC CMG (October 3, 1882 – April 5, 1974) was a Canadian painter and a founding member of the Group of Seven. Jackson made a significant contribution to the development of art in Canada, and was successful in bringing together the artists of Montreal and Toronto. He exhibited with the Group of Seven from 1920. In addition to his work with the Group of Seven, his long career included serving as a war artist during World War I (1917–19) and teaching at the Banff School of Fine Arts, from 1943 to 1949. In his later years he was artist-in-residence at the McMichael Gallery in Kleinberg, Ontario.

As a young boy, Jackson worked as an office boy for a lithograph company, after his father abandoned his family of six children. It was at this company that Jackson began his art training. In the evenings, he took classes at Montreal's Monument-National.

In 1905, Jackson worked his way to Europe on a cattle boat, returning by the same means and travelling on to Chicago. In Chicago, he joined a commercial art firm and took courses at the Art Institute of Chicago. He saved his earnings and, by 1907, was able to visit France to study Impressionism. In France, Jackson decided to become a professional painter, studying at Paris' Académie Julian under J. P. Laurens. Some of his most important artistic development was at the Etaples art colony, which he first visited in 1908 with his New Zealand friend Eric Spencer Macky (1880–1958). Jackson painted his Paysage Embrumé then and, rather to his surprise, it was accepted by the Paris Salon. Returning in 1912, he stayed with the Australian Arthur Baker-Clack (1877–1955). From this period date the Neo-Impressionist Sand dunes at Cucq and Autumn in Picardy, which was bought by the National Gallery of Canada the following year.

When Jackson returned to Canada, he settled in Sweetsburg, Quebec, where he began painting works such as the Neo-Impressionist "The Edge of Maple Wood". He held his first single artist exhibition at the Montreal Art Gallery with Randolph Hewton in 1913. Unable to make ends meet and discouraged by the Canadian art scene, he considered moving to the United States. However, he received a letter from J. E. H. MacDonald which changed his mind. MacDonald inquired about The Edge of Maple Wood, which he had seen at a Toronto art show, informing Jackson that Toronto artist Lawren Harris wanted to purchase the painting if he still owned it.

After the purchase, Jackson struck up a correspondence with the two Toronto artists, often debating on topics related to Canadian art. Jackson soon began visiting Toronto. Dr. James MacCallum convinced Jackson to relocate to Toronto by offering to buy enough of his paintings for one year to guarantee him a living income. He moved into the Studio Building which was financed by Lawren Harris, heir to the Massey-Harris farm machinery fortune, and Dr. James MacCallum. Harris, overseeing construction of the building, was too busy to concentrate on his own artistic endeavours and loaned his own studio space, over the Commerce Bank branch at the northwest corner of Yonge and Bloor streets, to the newly arrived Montrealer, A. Y. Jackson. The spot is now occupied by the 34-storey 2 Bloor West. Jackson was a welcome addition to the Toronto art scene, having traveled in Europe and bringing with him a respected – though as yet not particularly successful – talent. The canvas taking shape while he waited to move into the Studio Building, Terre Sauvage, became one of his most famous. In January 1914 the Studio Building was ready for occupation. Tom Thomson was another of the first residents of the building and shared a studio with Jackson for a year. Like the other Group of Seven painters, Jackson embraced landscape themes and sought to develop a bold style. An avid outdoorsman, Jackson became good friends with Tom Thomson, and the duo often fished and sketched together, beginning with a trip to Algonquin Park in fall 1914. Inspired by Thomson, Jackson and the other painters who would one day be known as the Group of Seven undertook trips to Algonquin Park, Georgian Bay, Algoma and the North Shore.