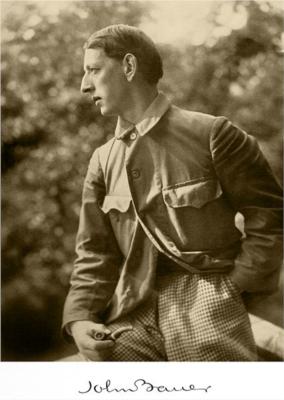 John Albert Bauer (4 June 1882 – 20 November 1918) was a Swedish painter and illustrator. His work is concerned with landscape and mythology, but he also composed portraits. He is best known for his illustrations of early editions of Bland tomtar och troll (Among Gnomes and Trolls), an anthology of Swedish folklore and fairy tales.

Bauer was born and raised in Jönköping. At 16 he moved to Stockholm to study at the Royal Swedish Academy of Arts. While there he received his first commissions to illustrate stories in books and magazines, and met the artist Ester Ellqvist, whom he married in 1906. He traveled throughout Lappland, Germany and Italy early in his career, and these cultures deeply informed his work. He painted and illustrated in a romantic nationalistic style, in part influenced by the Italian Renaissance and Sami cultures. Most of his works are watercolors or prints in monochrome or muted colours; he also produced oil paintings and frescos. His illustrations and paintings broadened the understanding and appreciation of Swedish folklore, fairy tales and landscape.

When Bauer was 36, he, Ester and their son, Bengt, drowned in a shipwreck on Lake Vättern.

John Bauer was born and raised in Jönköping, the son of Josef Bauer, a man of Bavarian origin, and Emma Charlotta Wadell, from a farming family from the town Rogberga just outside Jönköping. Josef Bauer came to Sweden in 1863, penniless. He founded a successful charcuterie business at the Östra Torget in Jönköping. The family lived in the apartment above the shop until 1881 when the construction of their house in Sjövik was completed. John, born in 1882, lived at the Villa Sjövik by the shore of Lake Rocksjön with his parents and two brothers, one older and one younger; his only sister died at a young age. The family home would remain central to him long after he lived on his own. His initial schooling was at the Jönköpings Högre Allmäna Läroverk (The Jönköping Public School of Higher Education), followed by the Jönköpings Tekniska Skola (The Jönköping Technical School) from 1892 to 1898. He spent most of his time drawing caricatures of his teachers and daydreaming, something not appreciated by his teachers.

He was given to sketching and drawing from an early age, without encouragement from his family. However, when he turned sixteen and wanted to go to Stockholm to study art, they were enthusiastic for him and backed him financially. In 1898, he was one of the 40 applicants to study at the Royal Swedish Academy of Arts, and although he was deemed well qualified for a place at the academy, he was too young to be accepted. He spent the next two years at the Kaleb Ahltins school for painters. During this time he was, like most teenagers, torn between hope and despair, something that is reflected in his artwork.

By 1900, he was old enough to attend the Academy of Arts, and was one of the three students admitted that year; the two other successful applicants were his friends Ivar Kamke and Pontus Lanner. He studied traditional illustrations and made drawings of plants, medieval costumes and croquis; all of which served him in his later work. One of his teachers, professor and noted historic painter, Gustaf Cederström praised Bauer: