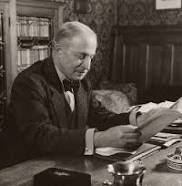 Clarence Alphonse Gagnon, R.C.A., (8 November 1881 – 5 January 1942) was a French Canadian painter, draughtsman, engraver and illustrator, from the province of Quebec. He is well known for his landscape paintings of the Laurentians and the Charlevoix region of eastern Quebec.

Clarence Alphonse Gagnon was born in Montreal on November 8, 1881. He was the son of Alphonse E. Gagnon, a milling manager, and a cultured English mother, who was interested in literature. Part of his childhood was spent in Sainte Rose, a village north on Montreal. Early in life, his mother had encouraged him to learn drawing and painting, but his father wanted him to become a businessman.

He studied with William Bremner at the Art Association of Montreal in 1897. Desiring to improve his knowledge about art, he went to the Académie Julian in Paris, and studied under Jean-Paul Laurens from 1904 to 1905. Before returning to Canada in 1909, Gagnon spent time painting in France and Italy.

He then lived in Baie-Saint-Paul, where he produced many paintings depicting nature and the Canadian people. He invented a new kind of winter landscape that consisted of mountains, valleys, sharp contrasts, vivid colours, and sinuous lines. He became a member of the Royal Canadian Academy of Arts in 1922.

Gagnon took trips to Venice, Rouen, Saint-Malo and the Laurentians in Quebec to paint landscapes. He illustrated the pages of the novel Maria Chapdelaine by Louis Hémon. As well, he was the illustrator for Louis-Frédéric Rouquette in 1929 in Le Grand silence blanc. He lived in France from 1924 to 1936.

Gagnon died on January 5, 1942 at the Royal Victoria Hospital in Montreal. He was survived by his wife and three brothers, Wilford, Ernest and Frederick. He is buried at the Notre-Dame-des-Neiges Cemetery in Montreal. A bust has been erected in his memory by the Galerie Clarence Gagnon in Quebec City.