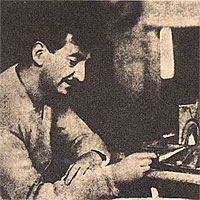 Georgy Bogdanovich Yakulov - Russian painter, avant-garde, graphic artist, stage designer, creator of the "Theory of Light and the origin of styles in art" known as the "Theory of colored suns".
Studied painting for two years at the Moscow School of Painting, Sculpture and Architecture. During his military service, spent partly in northeast China, he developed an appreciation of Eastern light effects and decoration.
In 1907 he began exhibiting with the Moscow Association of Artists, the Union of Russian Artists and Mir Iskusstva, and in Paris and Berlin. He travelled to Italy (1910) and to Paris (1912–1913), where he met Sonia and Robert Delaunay, discovering that his artistic ideas of light corresponded with their theory of Simultanism.
Yakulov became a member of the Leftist Federation of Painters, organised the decorative, yet abstract interior design of the Café Pittoresque in Moscow, and participated in decorative preparations for various private balls, spectacles and amateur theatrical events in 1910 and 1911. His career in the theatre began officially in 1918, when he designed the sets for Aleksandr Tairov’s Obmen (The exchange) at the Kamerny Theatre. Yakulov’s subsequent designs for Tairov, Princess Brambilla (1920) and Giroflé-Girofla (1922), combined traditional theatrical techniques with modernist abstraction.
In 1925 Yakulov returned to Paris to exhibit in the Exposition Internationale des Arts Décoratifs, and was commissioned by Diaghilev to design for the Ballets Russes production of Le Pas d’acier, eventually performed in 1927 at the Théâtre Sarah Bernhardt. He died a year later in Russia, leaving behind unrealised designs for Vsevolod Meyerhold’s play Misteriya-Buff.