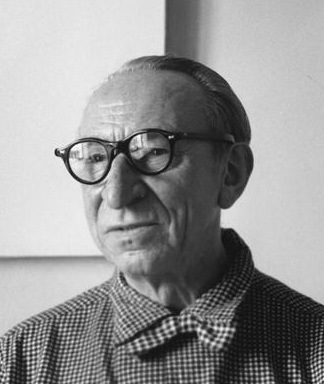 Amédée Ozenfant (15 April 1886 – 4 May 1966) was a French cubist painter and writer. Together with Charles-Edouard Jeanneret (later known as Le Corbusier) he founded the Purist movement.

Ozenfant was born into a bourgeois family in Saint-Quentin, Aisne and was educated at Dominican colleges in Saint-Sébastien. After completing his education he returned to Saint-Quentin and began painting in watercolour and pastels.

In 1904 he attended a drawing course run by Jules-Alexandre Patrouillard Degrave at the Ecole Municipale de Dessin Quentin Delatour in Saint-Quentin. In 1905 he began training in decorative arts in Paris, where his teachers were Maurice Pillard Verneuil and later Charles Cottet.

Between 1909 and 1913 he travelled to Russia, Italy, Belgium, and the Netherlands and attended lectures at the Collège de France in Paris. In 1915, in collaboration with Max Jacob and Guillaume Apollinaire, Ozenfant founded the magazine L’Elan, which he edited until 1916, and his theories of Purism began to develop.

He met the Swiss architect and painter Charles-Edouard Jeanneret (Le Corbusier) in 1917, and they jointly expounded the doctrines of Purism in their book Après le cubisme. Its publication coincided with the first Purist exhibition, held at the Galerie Thomas in Paris in 1917, in which Ozenfant exhibited. There was a further collaboration between them on the journal L’Esprit nouveau, which was published from 1920 to 1925.

A second Purist exhibition was held at the Galerie Druet, Paris, in 1921 in which Ozenfant again exhibited. In 1924 he opened a free studio in Paris with Fernand Léger, where they both taught with Aleksandra Ekster and Marie Laurencin. Ozenfant and Le Corbusier wrote La Peinture moderne in 1925 and in 1928 Ozenfant published Art, which was subsequently published in English as The Foundations of Modern Art in 1931. In this he fully expounds his theory of Purism, and it is remarkable for its idiosyncratic and aphoristic style.

He later founded his own atelier, l’Académie Ozenfant, in the residence and studio that Le Corbusier had designed for him. He moved to London in 1936, where he set up the Ozenfant Academy of Fine Arts in May of that year, before moving to New York some two years later. His students in London included Leonora Carrington, Sari Dienes, Stella Snead and Hamed Saeed. Students in New York included the Canadian Madeleine Laliberté.

In the early Purist manifestoes, colour was deemed secondary to form, and this could be seen in the careful placing of colour to reinforce discrete architectural elements by Le Corbusier in his work of the mid-1920s. However, by the time he was in England, Ozenfant had refined his ideas about colour and outlined many of these in the six articles on the subject that he wrote for the Architectural Review. Colour was now regarded as an essential element of architecture, rather than something considered by the architect while his work was being erected. Ozenfant believed that colour always modifies the form of the building and should receive more careful attention.