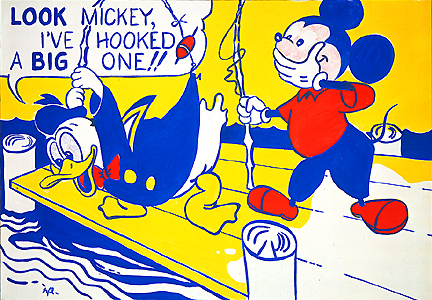 At age 38, Roy Lichtenstein created the breakthrough painting Look Mickey (1961) that declared the emergence of the Pop Art style. Lichtenstein appropriated the scene from popular culture, showing two Disney icons, Mickey Mouse and Donald Duck in a humorous situation. In the painting, Mickey and Donald are on a pier: Donald swings the fishing pole above his head thinking he caught a fish when in fact he snagged his coattail. Mickey tries to stifle his laughter while Donald naively says in the bubble text: “Look Mickey, I’ve hooked a big one”.
Multiple stories were told about the origins of the legendary painting: Lichtenstein discovered the image in a bubble gum wrapper, the idea came about during a drawing game with his children or he was inspired by a conversation with the artist Allan Kaprow. Most likely, the source was an illustration in the 1960s children's book Donald Duck: Lost and Found. Lichtenstein’s interest in the subject, that culminated in the painting Look Mickey (1961), began four years earlier. In 1957 he used a projector to trace a large image of Mickey Mouse on his son’s bedroom wall. The characters of Mickey Mouse, Donald Duck, and Bugs Bunny were featured in earlier works: a series of paintings that were later destroyed, and drawings like Mickey Mouse I (1958) that mixed coarse strokes of pastel, crayon, and ink.

In Look Mickey, Lichtenstein explored the idea of mechanical reproduction in the printing process, imitating the technique through the language of painting. He hand-painted dots on Mickey’s face and in Donald’s eyes mimicking the ink dots of the Ben-Day printing process that was used in the production of inexpensive comic books and magazines. The artist made subtle changes to the original image in order to present a more cohesive image. He omitted background figures, rotated the point of view by 90 degrees, and limited his palette to the three primary colors and white. By appropriating an image from popular culture, and placing it in the context of fine art, Lichtenstein injected irony and humor into the painting. Lichtenstein’s image is ambiguous, the viewer can identify both with the narrator, Mickey, and the victim, Donald.

The painting represented a radical stylistic shift in Lichtenstein’s art, who hoped that by presenting something completely different he would break through to the forefront of mainstream art. Lichtenstein admitted that the painting reflected his feelings on his professional status: “The subject of the painting is me”. In this way, the two characters can represent Lichtenstein’s sentiment toward this artistic experiment. Donald’s enthusiastic attempt represents his ambition and hope for an artistic breakthrough, while Mickey represents the sobering reality and possibility that it might fail miserably.

Look Mickey brought Lichtenstein the mainstream success he hoped for, but it also received harsh criticism. He was criticized for counterfeiting commercial images, and famously an art critic called him one of the worst artists in America. Art historians and critics regard Look Mickey as revolutionary work that announced the Pop Art movement. The artist highlighted the significance of the painting in a later work, Artist's Studio—Look Mickey (1973), in which the painting is featured prominently on the back wall.