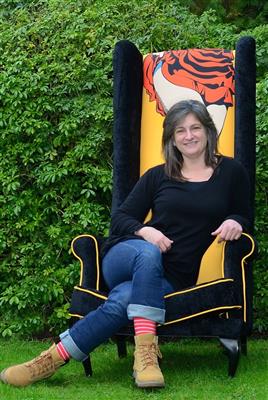 Deborah Azzopardi outside her studio, 2014. Photo by Cristina Schek (detail)


Deborah Azzopardi (born 1958, in Golders Green) is a contemporary British artist working in the style of Pop Art in London. She has been working and developing her style for the last 30 years. She is most noted for her painting ‘Sssshhh’, which has sold a similar number of copies as Vladimir Tretchikoff’s, Chinese Girl.


Early in her career, Azzopardi was a licensee to The Walt Disney Company. She started painting in her 20s, after having her first child. Following a short illness she devoted her life to her family and art. She commented, "I have always enjoyed art but didn't have the opportunity to study when I was younger. Life was about survival."


Reproductions of her work was first sold widely at IKEA. Today, Azzopardi’s originals are sold through the Cynthia Corbett Gallery in London, UK, and the Bonhams and Christie’s auction houses.


Deborah Azzopardi works in the style of Pop Art, a 1960s art movement, utilising flat cartoon-like imagery and bright colour in a manner stylistically similar to the American artists Roy Lichtenstein and Andy Warhol. Her distinctive features are her use of basic, bold colours, resulting in large scale compositions that critics have called lively, provoking and humorous.


In March 2014, the artist had her first solo UK exhibition of originals and limited editions on Cork Street, London and launched a book, published by Iologies Fine Art Publications. Azzopardi's debut book ‘Sshh…’ showcases her work over the previous 10 years and features more than 100 images and a foreword by art critic, Estelle Lovatt FRSA.


“Unique in approach, you easily recognise an Azzopardi picture. America has Lichtenstein we have Azzopardi. Working simple graphics and toned shading (for depth), the Pop Art line that Azzopardi sketches is different to Lichtenstein’s. Hers is more curvaceous. Feminine. Whereas his lines are male, brash and clunky. And her humour is distinctively British.”
— extract from the foreword to Deborah Azzopardi’s book ‘Sshh…’ by Estelle Lovatt FRSA.