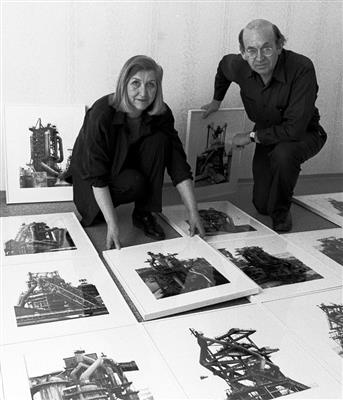 Bernhard "Bernd" Becher (German: [ˈbɛçɐ]; August 20, 1931 – June 22, 2007), and Hilla Becher, née Wobeser (September 2, 1934 – October 10, 2015), were German conceptual artists and photographers working as a collaborative duo. They are best known for their extensive series of photographic images, or typologies, of industrial buildings and structures, often organised in grids. As the founders of what has come to be known as the ‘Becher school’ or the ‘Düsseldorf School’ they influenced generations of documentary photographers and artists. They have been awarded the Erasmus Prize and the Hasselblad Award.


Bernd Becher was born in Siegen. He studied painting at the Staatliche Akademie der Bildenden Künste Stuttgart from 1953 to 1956, then typography under Karl Rössing at the Kunstakademie Düsseldorf from 1959 to 1961. Hilla Becher was born in Potsdam. Prior to Hilla's time studying photography at the Kunstakademie Düsseldorf from 1958 to 1961, she had completed an apprenticeship as a photographer in her native Potsdam. Both began working as freelance photographers for the Troost Advertising Agency in Düsseldorf, concentrating on product photography. They married in 1961.


Meeting as students at the Kunstakademie Düsseldorf in 1957, Bernd and Hilla Becher first collaborated on photographing and documenting the disappearing German industrial architecture in 1959. The Ruhr Valley, where Becher’s family had worked in the steel and mining industries, was their initial focus. They were fascinated by the similar shapes in which certain buildings were designed. After collating thousands of pictures of individual structures, they noticed that the various edifices – of cooling towers, gas tanks and coal bunkers, for instance – shared many distinctive formal qualities. In addition, they were intrigued by the fact that so many of these industrial buildings seemed to have been built with a great deal of attention toward design.


Together, the Bechers went out with a large 8 x 10-inch view camera and photographed these buildings from a number of different angles, but always with a straightforward "objective" point of view. They shot only on overcast days, so as to avoid shadows, and early in the morning during the seasons of spring and fall. Objects included barns, water towers, coal tipples, cooling towers, grain elevators, coal bunkers, coke ovens, oil refineries, blast furnaces, gas tanks, storage silos, and warehouses. At each site the Bechers also created overall landscape views of the entire plant, which set the structures in their context and show how they relate to each other. They excluded any details that would detract from the central theme and instead set up comparisons of viewpoint and lighting through which the eye is led to the basic structural pattern of the images being compared. This principle, which is allied to the philosophy underlying the New Topographics movement, is most obvious in the two published series,
Anonyme Skulpturen: Eine Typologie technischer Bauten and Typologien, Industrieller Bau, 1963–1975, in which the images are contrasted in groups of three. Another early project, which they pursued for nearly two decades, was published as Framework Houses (Schirmer/Mosel) in 1977, a visual catalog of types of structures, an approach that characterized much of their work.