{{selectedLanguage.Name}}
Sign In Sign out
Edit Translate Action History
×
Home/ Artists / Romanticism .../ J.M.W. Turner/ The Fighting Temeraire tugged to her last berth to be broken up 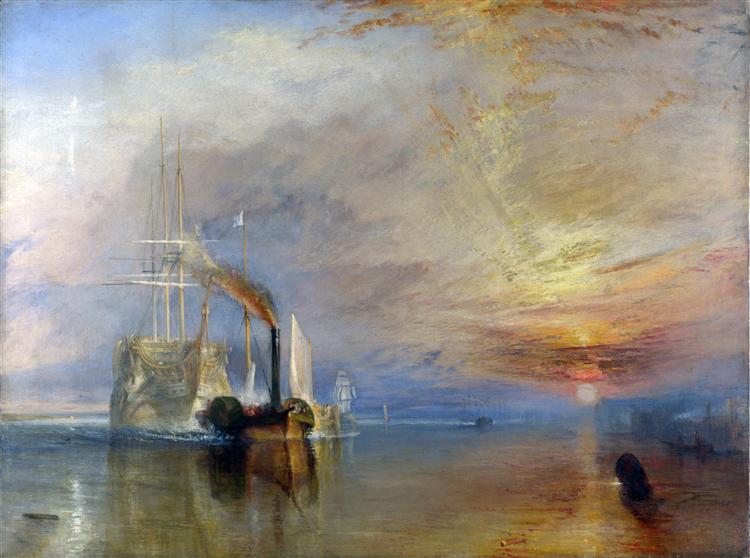 The Fighting Temeraire tugged to her last berth to be broken up is an oil painting executed in 1839 by the English artist J. M. W. Turner. It depicts one of the last second-rate ships of the line which played a distinguished role in the Battle of Trafalgar in 1805, the 98-gun ship HMS Temeraire, being towed by a paddle-wheel steam tug towards its final berth in Rotherhithe south east London in 1838 to be broken up for scrap. The painting hangs in the National Gallery, London, having been bequeathed to the nation by the artist in 1851. In 2005 it was voted the nation's favourite painting in a poll organized by BBC Radio 4's Today programme.

Sir Henry Newbolt wrote a ballad titled The Fighting Temeraire, referencing the scenario depicted: "And she's fading down the river, But in England's song for ever, She's the Fighting Téméraire." Turner himself presented the painting for display in 1839 accompanied by an altered excerpt from Thomas Campbell's poem Ye Mariners of England, reading: "The flag which braved the battle and the breeze,/No longer owns her."

When Turner came to paint this picture in 1839 he was at the height of his career, having exhibited at the Royal Academy, London, for 40 years. He was renowned for his highly atmospheric paintings in which he explored the subjects of the weather, the sea and the effects of light. He spent much of his life near the River Thames estuary and did many paintings of ships and waterside scenes, both in watercolour and in oils. Turner frequently made small sketches and then worked them into finished paintings in the studio. He was present when this ship was towed and made some sketches of it. However, he appears to have used some license in the finished painting, which has taken on symbolic meaning. The painting is of a ship being towed away for scrap. It is highly metaphorical as the ship has performed great service for its country and is now being removed from society.

The composition of this painting is unusual in that the most significant object, the old warship, is positioned well to the left of the painting, where it rises in stately splendour and almost ghostlike colours against a triangle of blue sky and rising mist that throws it into relief. The beauty of the old ship is in stark contrast to the dirty blackened tugboat with its tall smokestack, which scurries across the still surface of the river "like a water beetle".

Turner has used the triangle of blue to frame a second triangle of masted ships, which progressively decrease in size as they become more distant. Temeraire and tugboat have passed a small river craft with its gaff rigged sail barely catching a breeze. Beyond this a square-rigger drifts, with every bit of sail extended. Another small craft shows as a patch of white farther down the river. In the far distance, beyond the second tugboat which makes its way towards them, a three-masted ship rides at anchor. The becalmed sailing vessels show the obsolescence of sail. On the opposite side of the painting to Temeraire, and exactly the same distance from the frame as the ship's main mast, the sun sets above the estuary, its rays extending into the clouds above it, and across the surface of the water. The flaming red of the clouds is reflected in the river. It exactly repeats the colour of the smoke which pours from the funnel of the tugboat. The sun setting symbolises the end of an epoch in the history of the British Royal Navy. The demise of heroic strength is the subject of the painting, and it has been suggested that the ship stands for the artist himself, with an accomplished and glorious past but now contemplating his mortality. Turner called the work his "darling", which may have been due to its beauty, or his identification with the subject.