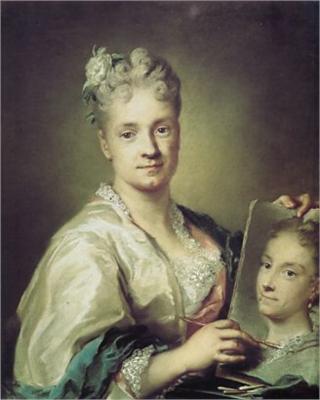 Self-portrait Holding a Portrait of Her Sister, 1709

Rosalba Carriera (12 January 1673 – 15 April 1757) was a Venetian Rococo painter. In her younger years, she specialized in portrait miniatures. It is for this that she was able to establish a career in portraiture. Carriera would later become known for her pastel work, a medium appealing to Rococo styles for its soft edges and flattering surfaces. She is remembered as one of the most successful women artists of any era.

Born in Venice with two sisters, Rosalba Carriera was a prominent and greatly admired portrait artist of the Italian Rococo. Her family was from the lower-middle-class in Venice, and as a child, she began her artistic career by making lace-patterns for her mother, who was engaged in that trade. However, when interests in lace waned and the industry began to falter, Carriera had to find a new means of providing for herself and her family.

The popularity of snuff-taking gave her an opportunity to do just that. Carriera began painting miniatures for the lids of snuff-boxes, and was the first painter to use ivory instead of vellum for this purpose. Gradually, this work evolved into portrait-painting, for which she pioneered the exclusive use of pastel. Prominent foreign visitors to Venice, young sons of the nobility on the grand tour and diplomats for example, clamored to be painted by her. The portraits of her early period include those of Maximilian II of Bavaria; Frederick IV of Denmark; the 12 most beautiful Venetian court ladies; the "Artist and her Sister Naneta" (Uffizi); and August the Strong of Saxony, who acquired a large collection of her pastels.

By 1700 she was already creating miniatures and by 1703 she completed her first pastel portraits. In 1704, she was made an 'Accademico di merito' by the Roman Accademia di San Luca, a title reserved for non-Roman painters.

By 1721, Carriera's left Venice for Paris, as portraits by her were in great demand. While in Paris, as a guest of the great amateur and art collector, Pierre Crozat. She painted Watteau, all the royalty and nobility from the King and Regent downwards, and was elected a member of the Academy by acclamation. Her brother-in-law, the painter Antonio Pellegrini, married to her sister Angela, was also in Paris that year. Pellegrini was employed by John Law, a British financier and adventurer, to paint the ceiling of the Grand Salle in Law's new Bank building.

Carriera's other sister, Giovanna, and her mother, were members of the party in France. Both sisters, particularly Giovanna, helped her in painting the hundreds of portraits she was asked to execute. This was because she undertook a lot of work in order to support her family. Carriera's diary of these 18 months in Paris was later published by her devoted admirer, Antonio Zanetti, the Abbé Vianelli, in 1793. Her extensive correspondence has also been published.

In the short time she spent in Paris, her work contributed to forming the new aristocratic tastes of the court and by extension, the tastes of Parisians. No longer did art serve only the monarchy's needs. Her freedom, colorfulness and charms were injected into the Rococo style (which she was the face behind) which soon dominated the arts.