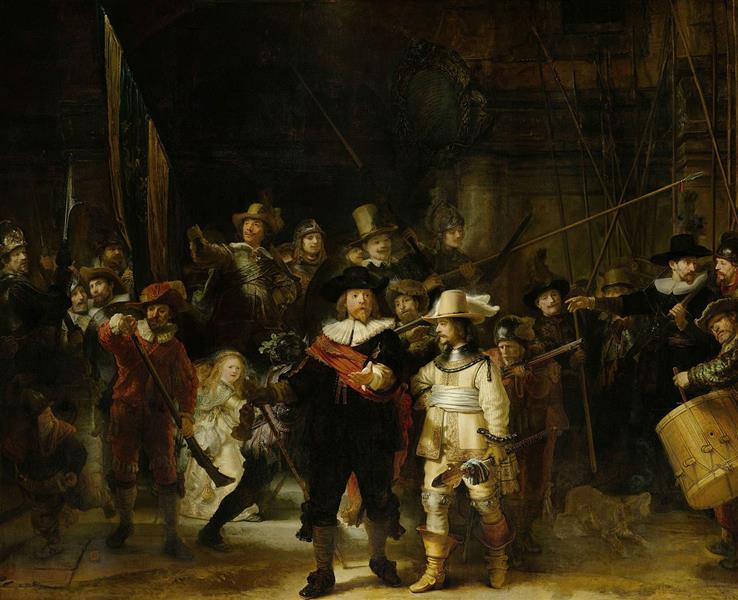 The best known work by Rembrandt, this painting resides at the State Museum in Amsterdam, where it is lauded as one of the most famous paintings in the world. For much of its history, the painting was covered with a thick layer of varnish, giving the impression that it was a night scene, hence the name. The varnish was removed in 1940, revealing the bright colors of the painting. The painting has also suffered damage at the hand of art dealers, who in 1715 cut the painting down on three side on order to fit it between two columns, and vandals, who have purposely tried to ruin the painting. In 1975, an unemployed school teacher attacked the work, leaving a large section of zig-zags scratches. The painting was successfully restored, although the scratches are still somewhat visible. In 1990, the painting was attacked again, by a man who threw acid on the canvas. The acid was quickly neutralized, however, and the painting was saved.

Militia Company of District II under the Command of Captain Frans Banninck Cocq, also known as The Shooting Company of Frans Banning Cocq and Willem van Ruytenburch, but commonly referred to as The Night Watch (Dutch: De Nachtwacht), is a 1642 painting by Rembrandt van Rijn. It is in the collection of the Amsterdam Museum but is prominently displayed in the Rijksmuseum as the best known painting in its collection. The Night Watch is one of the most famous Dutch Golden Age paintings.

The painting is famous for three things: its colossal size (363 cm × 437 cm (11.91 ft × 14.34 ft)), the dramatic use of light and shadow (tenebrism) and the perception of motion in what would have traditionally been a static military group portrait. The painting was completed in 1642, at the peak of the Dutch Golden Age. It depicts the eponymous company moving out, led by Captain Frans Banning Cocq (dressed in black, with a red sash) and his lieutenant, Willem van Ruytenburch (dressed in yellow, with a white sash). With effective use of sunlight and shade, Rembrandt leads the eye to the three most important characters among the crowd: the two gentlemen in the centre (from whom the painting gets its original title), and the woman in the centre-left background carrying a chicken. Behind them, the company's colours are carried by the ensign, Jan Visscher Cornelissen. The figures are almost life-size.

Rembrandt has displayed the traditional emblem of the arquebusiers in a natural way, with the woman in the background carrying the main symbols. She is a kind of mascot herself; the claws of a dead chicken on her belt represent the clauweniers (arquebusiers), the pistol behind the chicken represents clover and she is holding the militia's goblet. The man in front of her is wearing a helmet with an oak leaf, a traditional motif of the arquebusiers. The dead chicken is also meant to represent a defeated adversary. The colour yellow is often associated with victory.

For much of its existence, the painting was coated with a dark varnish, which gave the incorrect impression that it depicted a night scene, leading to the name by which it is now commonly known. This varnish was removed only in the 1940s.

In 1715, upon its removal from the Kloveniersdoelen to the Amsterdam Town Hall, the painting was trimmed on all four sides. This was done, presumably, to fit the painting between two columns and was a common practice before the 19th century. This alteration resulted in the loss of two characters on the left side of the painting, the top of the arch, the balustrade, and the edge of the step. This balustrade and step were key visual tools used by Rembrandt to give the painting a forward motion. A 17th-century copy of the painting by Gerrit Lundens at the National Gallery, London shows the original composition.

The painting was commissioned (around 1639) by Captain Banning Cocq and seventeen members of his Kloveniers (civic militia guards). Eighteen names appear on a shield, painted circa 1715, in the centre right background, as the hired drummer was added to the painting for free. A total of 34 characters appear in the painting. Rembrandt was paid 1,600 guilders for the painting (each person paid one hundred), a large sum at the time. This was one of a series of seven similar paintings of the militiamen (Dutch: Schuttersstuk) commissioned during that time from various artists.