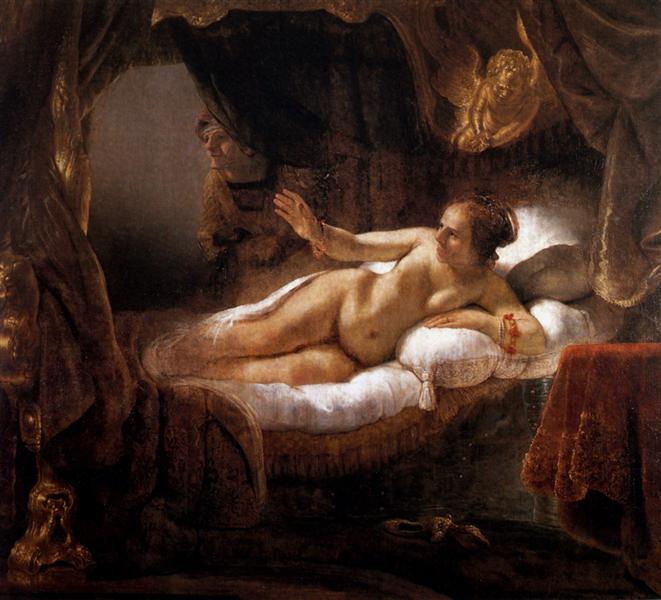 This painting depicts the mythical character of Danae, welcoming Zeus into her bed, and who later bore his son, Perseus. Rembrandt originally used his first wife, Saskia, as the model in the painting, but later replaced her face with the face of his mistress Geertje Dircx. In 1985, a man threw acid on the painting as it hung on display at the Hermitage Museum. He also cut the canvas twice with a knife. The most badly damaged parts of the painting were to the face and hair of Danae, her right arm, and her legs. The entire middle section of the painting was also dripping with a conglomeration of paint spots. Restoration of the painting began the same day, and was finished twelve years later. Then man who threw the acid was later declared insane.

Danaë is a 1636 painting by the Dutch artist Rembrandt. Originally part of Pierre Crozat's collection, it has been located at the Hermitage Museum, in St. Petersburg, Russia sine the 18th century. It is a life-sized depiction of the character Danaë from Greek mythology, the mother of Perseus. She is presumably depicted as welcoming Zeus, who impregnated her in the form of a shower of gold. Given that this is one of Rembrandt's most magnificent paintings, it is not out of the question that he cherished it, but it also may have been difficult to sell because of its eight-by-ten-foot size. Although the artist's wife Saskia was the original model for Danaë, Rembrandt later changed the figure's face to that of his mistress Geertje Dircx.

On June 15, 1985 Rembrandt's painting was attacked by Bronius Maigys (lt), a Soviet Lithuanian national later judged insane; he threw sulfuric acid on the canvas and cut it twice with his knife. The entire central part of the composition was turned into a mixture of spots with a conglomerate of splashes and areas of dripping paint. The worst damage was to the face and hair of Danaë, her right arm, and legs.

The restoration of the painting was accomplished between 1985 and 1997 by staff of the State Hermitage's Laboratory of Expert Restoration of Easel Paintings: Ye. N. Gerasimov (group leader), A. G. Rakhman, and G. A. Shirokov, with the participation of T. P. Alioshina in matters of scientific methodology.