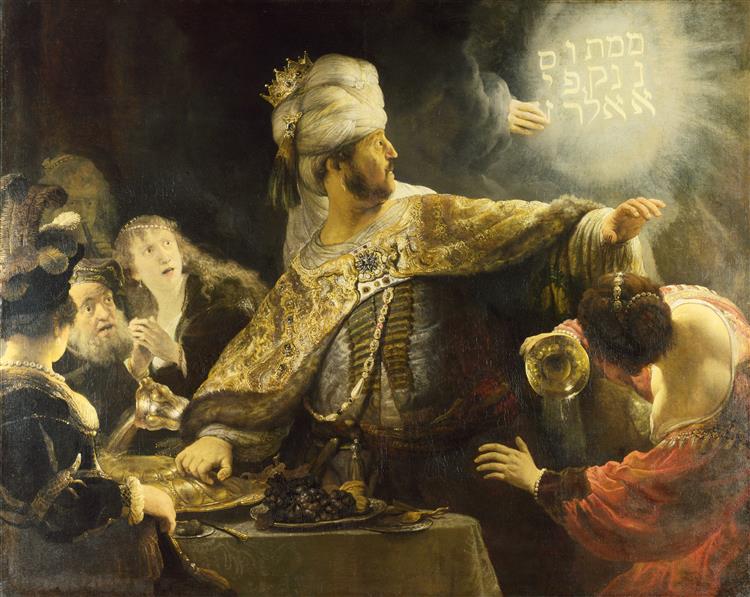 Rembrandt based this painting off of the story of Belshazzar as well as the writing on the wall in Book of Daniel in the Old Testament. Although Amsterdam was part of the Holy Roman Empire at the time, it also had a large Jewish population, and so this is a story of which many of Rembrant’s contemporaries would have been familiar. The artist’s intention at the time was to create a portrait of a religious story to which the public, who were largely illiterate, could refer. Rembrandt produced many stories from the bible for the same purpose, including Return of the Prodigal Son and Christ with the Sick around Him.

Belshazzar's Feast is a painting by Rembrandt housed in the National Gallery, London. The painting is Rembrandt's attempt to establish himself as a painter of large, baroque history paintings.

The story of Belshazzar and the writing on the wall originates in the Old Testament Book of Daniel. The Babylonian king Nebuchadnezzar looted the Temple in Jerusalem and has stolen the sacred artefacts such as golden cups. His son Belshazzar used these cups for a great feast where the hand of God appeared and wrote the inscription on the wall prophesying the downfall of Belshazzar's reign.

The inscription on the wall is an interesting element in this painting. Rembrandt lived in the Jewish Quarter of Amsterdam and "derived the form of Hebrew inscription from a book by his friend, the learned Rabbi and printer, Menasseh ben Israel, yet mistranscribed one of the characters and arranged them in columns, rather than right to left, as Hebrew is written." This last detail is essential as it relates to the question of why Belshazzar and his advisers were not able to decipher the inscription and had to send for Daniel to help them with it. The biblical story does not identify the language of the cryptic message, but it is generally assumed to be Aramaic, which, like Hebrew, is written in right-to-left rows, and not in right-to-left columns as in the painting. Although there is no accepted explanation why the Babylonian priests were unable to decipher the writing, the point of this unconventional arrangement – reading the text in the painting in the conventional row-wise left-to-right order results in a garbled message – may be to suggest why the text proved incomprehensible to the Babylonian wise men; indeed, this explanation is in accordance with the opinion of the amora Shmuel, which is mentioned in the Babylonian Talmud, Tractate Sanhedrin, 22 a, among various dissenting views. However, it seems unlikely that Rembrandt would have known this, as there is no evidence to suggest he was proficient in the Talmud.

In 1834 two brothers, Frederick and Henry Worseldine were charged with having stolen the painting. Frederick,was found guilty and transported to Tasmania for life. Henry was cleared, but followed his brother a few years later. Also of note their father, John, having left their mother some time after 1841 took up with a women by the name of Martha who after his death in 1848 was murdered by her new husband William Sheward who was hanged in Norwich the case caused some notoriety. <Morning Advertiser 12 September 1834 https://search.findmypast.co.uk/bna/viewarticle?id=bl%2f0001427%2f18340912%2f020><The old bailey online- Worseldine https://www.oldbaileyonline.org/search.jsp?form=_divs&kwparse=and&_divs_fulltext=WORSELDINE&ref=&_divs_div0Type_div1Type=&submit.x=50&submit.y=-16>

Rembrandt's handling of painting materials and his painting technique in Belshazzar's Feast are both exceptional and do not compare to any of his other works. The palette of this painting is unusually rich encompassing such pigments as vermilion, smalt, lead-tin-yellow, yellow and red lakes, ochres and azurite.