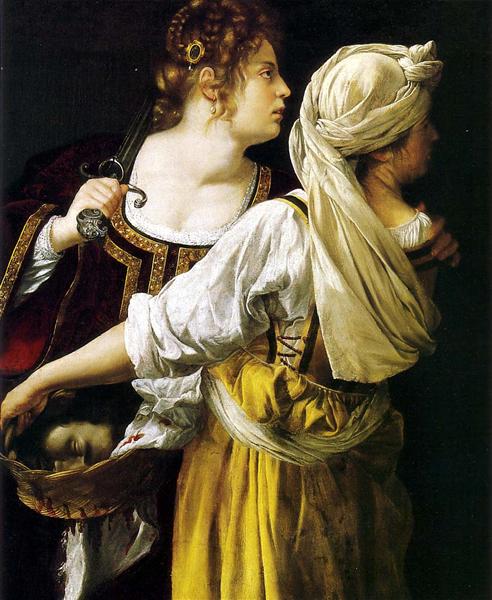 Judith and her Maidservant, 1613 - Artemisia Gentileschi

Tenebrism, derived from tenebroso, an Italian word meaning "dark, murky, gloomy," used dramatic contrasts between light and dark, as paintings with black areas and deep shadows would be intensely illuminated, often by a single light source. While tenebrism developed from chiaroscuro, unlike that technique, it did not strive for greater three-dimensionality, but was compositional, using deep darkness as a kind of negative space, while intense light in other areas created what has been called "dramatic illumination."

Though the Renaissance artist Albrecht Dürer and the Mannerists Tintoretto and El Greco used the technique earlier, tenebrism is usually identified with Caravaggio, who not only mastered the technique but made its "spotlight" effect a defining characteristic of his work. Due to works like The Martyrdom of St. Matthew (1600) he became widely influential, so much so thattenebristi, groups of artists employing the technique like the Utrecht School, were found throughout Northern Europe, Italy, and Spain. The term tenebrism was often applied to the works of Jusepe de Ribera, Francisco Ribalta, and other 17th century Spanish artists. At the same time, it was associated with the 17th century "candlelight tradition," a term describing night scenes illuminated by a single candle, as seen in some works by Gerrit van Honthorst, Rembrandt, and Georges de La Tour.