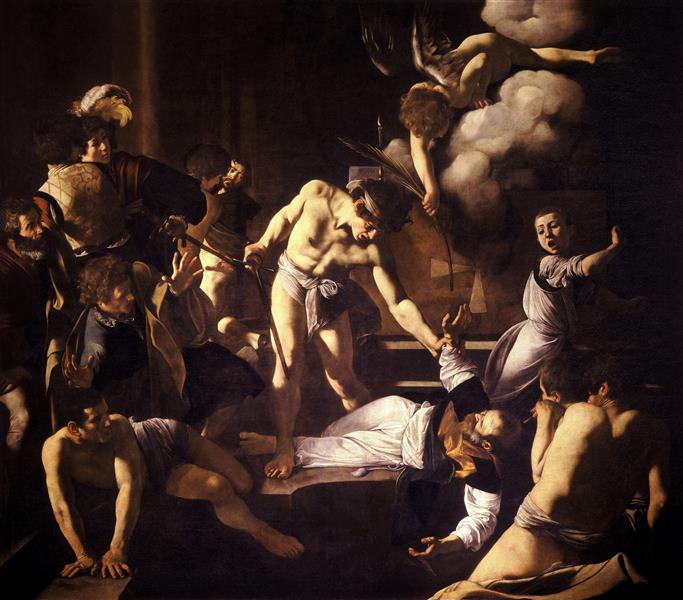 The Martyrdom of Saint Matthew

Caravaggio completed both Martyrdom of Saint Matthew and The Calling of Saint Matthew, his first two publicly commissioned works, for the Contarelli Chapel in Rome in 1600. This painting marks the exact time when the orthodox Mannerism gave way to Baroque emotionality, and immediately catapulted Caravaggio into stardom. The scene was specifically requested by Cardinal Contarelli before his death, and that the painting should require three things: the saint being murdered by a soldier, onlookers showing emotions of shock and disgust, and architecture as the background element. The painting, upon being x-rayed, shows evidence that Caravaggio attempted two different compositions before completing the one we see today, eventually eliminating the architectural element entirely.

The Martyrdom of Saint Matthew (Italian: Martirio di San Matteo; 1599–1600) is a painting by the Italian master Michelangelo Merisi da Caravaggio. It is located in the Contarelli Chapel of the church of the French congregation San Luigi dei Francesi in Rome, where it hangs opposite The Calling of Saint Matthew and beside the altarpiece The Inspiration of Saint Matthew, both by Caravaggio. It was the first of the three to be installed in the chapel, in July 1600.

The painting shows the martyrdom of Saint Matthew the Evangelist, author of the Gospel of Matthew. According to tradition, the saint was killed on the orders of the king of Ethiopia while celebrating Mass at the altar. The king lusted after his own niece, and had been rebuked by Matthew, for the girl was a nun, and therefore the bride of Christ. Cardinal Contarelli, who had died several decades earlier, had laid down very explicitly what was to be shown: the saint being murdered by a soldier sent by the wicked king, some suitable architecture, and crowds of onlookers showing appropriate emotion. (See the article on the Contarelli Chapel).

The commission (which, strictly speaking, was from his patron, Cardinal Francesco Maria Del Monte, rather than from the church itself), caused Caravaggio considerable difficulty, as he had never painted so large a canvas, nor one with so many figures. X-rays reveal two separate attempts at the composition before the one we see today, with a general movement towards simplification through reduction in the number of figures, and reduction – ultimately elimination – of the architectural element.

The first version revealed by the x-rays is in the Mannerist style of the most admired artist in Rome at the time, Giuseppe Cesari, with a crowd of small figures amidst massive architecture. It must have seemed static and distanced. The second version turned to Raphael for a model, adding a crowd of onlookers displaying fear and pity, including a woman who presumably represented the nun. This was in line with the crowded scene requested by Cardinal Contarelli and with the tenets of Mannerism, which demanded bodies and buildings defined by perspective and drawing, but Caravaggio had already developed a personal style in which bodies were defined by light and darkness and in which backgrounds were eliminated.

At this point Caravaggio left off the Martydom and turned his attention to the companion piece, the Calling. This drew on his own earlier genre-pieces, Cardsharps and The Fortune Teller, but writ large. Apparently re-inspired, or perhaps with renewed self-confidence, Caravaggio turned back to the Martydom, but this time working in his own idiom. The third version dropped the architecture, reduced the number of actors, and moved the action closer to the viewer; more than this, it introduced the dramatic chiaroscuro which picks out the most important elements of the subject, in much the same way a spotlight picks out the action on a stage, but centuries before spotlights were imagined, and chose to represent the moment of greatest drama, as the murderer is about to plunge his sword into the fallen saint. This is the version we see today, the action caught at the moment of highest drama, the bystanders reduced to supporting roles by the sharply selective light, the whole giving the impression of a moment seen as if in a lightning flash.