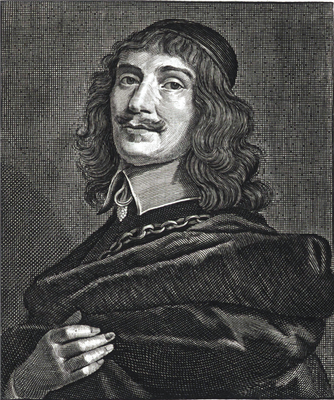 Gerard van Honthorst (Gerrit van Honthorst) (4 November 1592 – 27 April 1656) was a Dutch Golden Age painter who became known for his depiction of artificially lit scenes, eventually receiving the nickname Gherardo delle Notti ("Gerard of the nights"). Early in his career he visited Rome, where he had great success painting in a style influenced by Caravaggio. Following his return to the Netherlands he became a leading portrait painter.


Van Honthorst was born in Utrecht, the son of a decorative painter, and trained under his father, and then under Abraham Bloemaert.


Having completed his education, Honthorst went to Italy, where he is first recorded in 1616. He was one the artists from Utrecht who went to Rome at around this time, all of whom were to be deeply influenced by the recent art they encountered there. They were named the Utrecht caravaggisti. The other three were Dirk van Baburen, Hendrick ter Bruggen and Jan van Bijlert. In Rome he lodged at the palace of Vincenzo Giustiniani, where he painted Christ Before the High Priest, now in London's National Gallery. Giustiniani had an important art collection, and Honthorst was especially influenced by the contemporary artists, including Caravaggio, Bartolomeo Manfredi and the Carracci. He was particularly known for his depiction of artificially lit scenes. Cardinal Scipione Borghese became another important patron, securing important commissions for him at San Silvestro Della Mariro, Montecompatri, and at Santa Maria della Vittoria in Rome. He also worked for Cosimo II de' Medici, Grand Duke of Tuscany.


Honthorst returned to Utrecht in 1620, and went on to build a considerable reputation both in the Dutch Republic and abroad. In 1623, the year of his marriage, he was president of the Guild of St. Luke in Utrecht. He soon became so fashionable that Sir Dudley Carleton, then English envoy at The Hague, recommended his works to the Earl of Arundel and Lord Dorchester. In 1626 Honthorst hosted a dinner for Rubens, and painted him as the honest man sought for and found by Diogenes.


Queen Elizabeth of Bohemia, sister of Charles I of England and Electress Palatine, then in exile in the Netherlands, commissioned Honthorst as a painter and employed him as a drawing-master for her children. Through her he became known to Charles, who invited him to England in 1628. There he painted several portraits, and a vast allegory, now at Hampton Court, of Charles and his queen as Diana and Apollo in the clouds receiving the Duke of Buckingham as Mercury and guardian of the King of Bohemia's children. He painted a more intimate group portrait of The Four Eldest Children of the King of Bohemia, (also at Hampton Court) in which the two eldest are depicted as Diana and Apollo.


After his return to Utrecht, Honthorst retained the patronage of the English monarch, painting for him, in 1631, a large picture of the king and queen of Bohemia and all their children. At around the same time he painted some pictures illustrating the Odyssey for Lord Dorchester, and some showing incidents of Danish history for Christian IV of Denmark. He also painted a portrait of the king's daughter Countess Leonora while she was in the Hague.